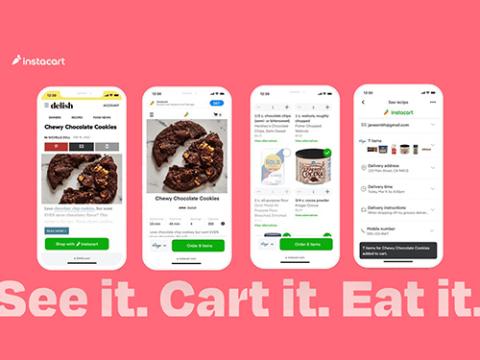 Instacart is expanding its presence in the shoppable recipe niche.

Customers can shop Instacart for ingredients via an embedded "See Recipe" button featured on recipe videos on TikTok, and via a "Shop with Instacart" button on recipes featured in Hearst Magazines' food culture properties. The buttons add all of the ingredients to a customer’s Instacart cart in just a few taps.

Select food creators on TikTok can now start using Shoppable Recipe functionality in their videos and earn payouts based on engagements and Instacart orders placed. Tasty will be among the first creators with access to the functionality.

Instacart hopes to gradually roll out the pilot to more TikTok creators. In the coming months, TikTok creators will also be able to create and link to their own custom Shoppable Recipe content.

The company is also kicking off a partnership with Hearst Magazines' main food and recipe properties including ‘The Pioneer Woman,’ ‘Good Housekeeping,’ ‘Country Living,’ and ‘Delish.’ As part of the partnership, Hearst will integrate Shoppable Recipe buttons onto all of their own recipe content on Delish.com, ThePioneerWoman.com, GoodHousekeeping.com, and CountryLiving.com.

Shoppable Recipes on TikTok and Hearst Magazines' properties join Instacart's existing partnership with Hearst and other publishers that are focused on showcasing recipes in the "Recipes" tab of the Instacart App. Additional product and platform integrations will be announced later this year.

This new program is the latest in a series of initiatives Instacart has launched to turn it into more of an e-commerce storefront and less of a traditional delivery platform. Other examples include the Ready Meals Hub, a new in-app destination featuring prepared foods from several grocers.

The rollout of Ready Meals followed Instacart’s recent acquisition of FoodStorm, an SaaS order management system that powers end-to-end order-ahead and catering experiences for grocery retailers. Over the coming months, in addition to expanding FoodStorm’s technology to new partners on the Instacart Marketplace, Instacart expects to expand the Ready Meals Hub to feature several more grocers and will work to make Ready Meals available to more retailers.

"At Instacart, we're passionate about food and we're invested in unlocking that passion for others," said Asha Sharma, COO of Instacart. "By making popular recipes from destinations like TikTok and Hearst Magazines' ‘Delish’ easily shoppable in a few taps, we're helping people put that passion into action by picking up a few items from their favorite local store so they can create exciting new meals. We're expanding our touchpoints beyond the weekly grocery shop or late-night cravings, and meeting people when food inspiration strikes and they want to discover new meals and cooking experiences. It's a win for both consumers and the retail partners they shop from on our marketplace."