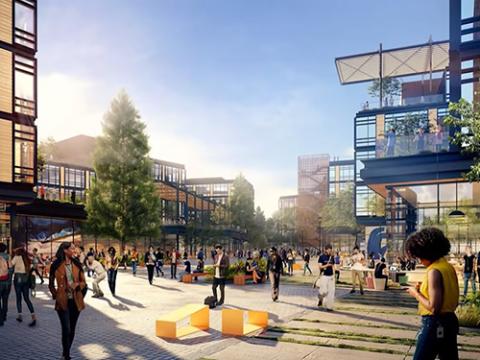 Facebook's new Willow Village campus in Menlo Park will be a mixed-use community with 1500 apartments and 125,000 sq. ft. of retail.

The city of New York this month reported that the value of its Class A office space plummeted by 25% in the past year. Cushman & Wakefield estimated that the office vacancy rate in major metros increased by 16% during the pandemic. That’s a killer of traffic for ground floor retailers and restaurants in center city.

But not all businesses are clearing out of their office space. Tech giants like Facebook, Apple, Netflix, Google, and Microsoft all benefited from a robust increase in their market capitalizations and some are expanding their office footprints across the U.S. This may be good news for many office owners in effected cities, but it may not result in a big win for the adjacent retail and restaurant operators.

In order to keep employees engaged in their work, big tech companies offer them free on-site meals, snacks, and other amenities. This weighs negatively on sales at local shops and, especially, restaurants that make substantial portions of their revenues between 11:00 a.m. and 3:00 p.m. The city of Palo Alto went so far as to ban Facebook from offering free food to its employees due to the impact on local restaurants.

Landlords and owners seeking big tech tenants may want to consider the impact it will have on their local restaurant businesses before signing those significant leases. The decisions they make have the potential to preserve—or severely weaken—the vitality of the very neighborhood in which they operate.

There are several approaches to consider, including allocation of a portion of the retail rental space directly to the tenant’s rent. This approach escalates tech tenants’ occupancy costs, but it captures the negative externalities they themselves create. Young and sophisticated tech industry workers crave amenities such as gyms, restaurants, bars, and shops near their workplaces, and this is a way to keep and hire top talent. Building owners may need to account for the retail and restaurant leases at market levels to adhere to lender requirements, but payment on those retail and restaurant spaces would come from both the operator and the technology tenant.

Another possibility is having tech companies pay for their employees to visit local restaurants and retailers through a contained, cashless payments system. In this scenario, tenants would offer their employees a weekly allowance to spend in nearby retail and restaurant establishments as a fringe benefit for employees. Landlords and ownership would assist in implementing the cashless infrastructure, partnering with neighboring buildings, while tenants would fund the allowances. Universities have implemented programs like this for years, giving students the ability to pay for food services both on campus and off. The University of Michigan’s Dining Dollars and Stanford Cardinal Dollars can be used at both on-campus and off-campus restaurants.

The allowance approach allows building owners to maintain existing retail rents while providing cash flow to small businesses in the area. These cashless systems could then be leveraged as amenities across a landlord’s portfolio to protect small businesses.

A third option would be to incentivize catering and food service for existing retail tenants near new and existing technology offices. Restaurant tenants interested in catering small or large events held at these offices would pay a nominal monthly fee to the landlord to participate in the program. Building ownership would then require a portion of the buildout to serve as a ghost kitchen for restaurant operators in the program to prepare catering meals so as not to disrupt ordinary operations at the restaurant locations. Restaurants in the program would automatically qualify as approved vendors to the technology companies, and restaurant operators would offer meaningful discounts to the technology companies for participating in the program.

Many more approaches can be considered in dealing with this problem, but the three offered here are workable, outside-the-box concepts that can help preserve neighborhoods, rent rolls, and small businesses. At the same time, these approaches need not be mutually exclusive. They merely aim to solve a problem technology companies posing to retail businesses and landlords alike.

Bradley Tisdahl is CEO of Tenant Risk Assessment, a tenant credit consulting firm. He can be contacted at [email protected].