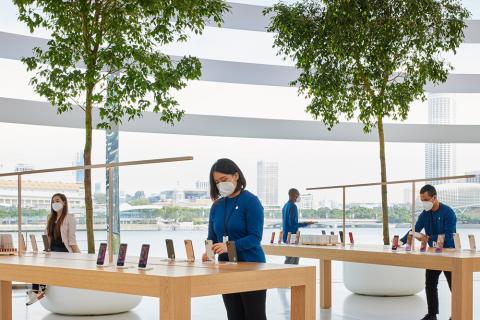 Workers at an Apple store in Atlanta have filed for a union election.

Employees at an Apple store in Atlanta have filed a petition to hold a union election. It will be the first such election at an Apple retail location in the U.S. If the vote is successful, the store, located at the Cumberland Mall, will have the distinction of being the first unionized Apple location.

More than 70% of the store’s 100 eligible employees signed union authorization cards, according to the Communications Workers of America (CWA), which is representing the Apple employees. The CWA represents workers throughout the telecommunications, media and tech industries, including employees at AT&T Mobility stores nationwide. Last week, Verizon workers at retail stores in the Seattle area who organized with CWA won their union election.

“Big tech corporations like Apple, Google and Amazon rely on a split workforce that denies out-of-office workers the equitable pay, benefits and respect they have earned,” the union said in a statement. “Retail workers at Apple provide critical sales and repair services to a range of customers, yet have been denied a living wage, cost of living adjustments or equitable stock options.”

In the statement, Derrick Bowles, an Apple Genius worker and part of the organizing effort, called Apple “a profoundly positive place to work.”

“But we know that the company can better live up to their ideals and so we’re excited to be joining together with our coworkers to bring Apple to the negotiating table and make this an even better place to work,” he added.

Apple is also facing a potential union vote at its Grand Central Terminal store in Manhattan. The employees leading the effort are partnering with Workers United, an affiliate of the Service Employees International Union, which is the same union supporting the growing union push at Starbucks.

Earlier this month, workers at Amazon’s warehouse in the Staten Island borough of New York City voted to unionize under the independent Amazon Labor Union. The group consists of current and former Amazon employees and is not affiliated with any national union.

Ed Barlow, president of CWA Local 3204 in Atlanta, called on Apple management to reject union-busting tactics so that employees could vote without interference or intimidation.

“These workers have been indispensable during the pandemic and the high level of service and support they provide is critical to Apple’s success,” he said.

Apple has more than 270 stores in the United States.