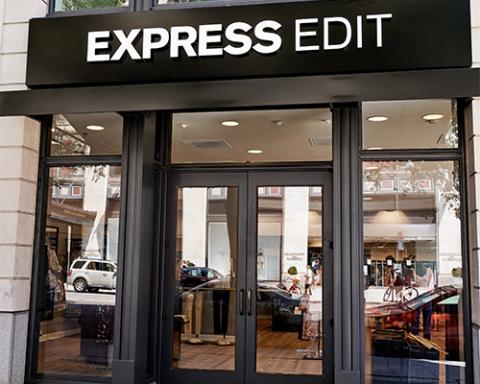 Express is opening smaller stores under the Express Edit banner.

The fashion apparel retailer narrowed its first-quarter loss amid sales increases across every category and raised its full-year guidance at a time when many retailers, from Walmart to Abercrombie & Fitch, are doing just the opposite.

Express has been working to transform its business, with an increased emphasis on digital sales, product extensions and expansions and a relaunch of its loyalty program. It also is opening smaller stores under the Express Edit banner, with five locations at the end of the first quarter.

The company opened its first women's only Express Edit store in March, in St. Louis. It plans to open stores in Manhattan’s Soho and Flatiron neighborhoods, and on Newbury Street in Boston. It also plans to open a men’s-only store in 2022.

Express is also expanding UpWest, a digitally-native, direct-to-consumer “purpose-driven” brand that it acquired in 2019.  It opened three stores in the first quarter, for 10 in total. It plans to open five more locations by the end of year.

Online sales demand grew 21%, with increases across key metrics for the website and mobile app, including traffic and average order value. The company said it is on track to achieve its goal of $1billion in e-Commerce demand by 2024.  Express recently launched a series of checkout enhancements, including the ability to easily shop store inventory and accelerate the brand’s buy-online-pick-up-in-store program.

"Our first quarter results exceeded our expectations,” said CEO Tim Baxter. “We have made significant progress against each one of the four foundational pillars of the EXPRESSway Forward strategy. Our brand purpose is taking hold, and as we build, activate and amplify our styling community, its reach and impact are expanding."

Express now forecasts comparable sales to increase between 8% and 10% for the fiscal year, compared with its previous guidance of between 7% and 9%. It expects adjusted earnings per share for 2022 to range from $0.14 to $0.20.

“I am energized by our momentum, and this is reflected in our increased annual outlook," Baxter said.

Express operates more than 550 retail and outlet stores in the United States and Puerto Rico. The store banners include Express, Express Outlet, Express Edit and UpWest.