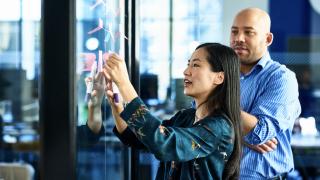 The 'Metaverse' is being built.

Facebook has big plans for its “Metaverse” concept, and it could evolve in a few different ways that would affect retailers.

By now, everyone has heard that Facebook is changing is corporate identity to Meta  (although the name of the Facebook social platform will remain the same). The company also plans to create a sophisticated digital world called the “Metaverse.” Here, consumers will use augmented and virtual reality technology to digitally engage with each other and their surroundings, with crossovers into the physical world.

Facebook admits it cannot currently bring the Metaverse concept to life outside the lab, and may never be able to, but the idea is certainly intriguing. Assuming the Metaverse arrives someday, how would it affect retailers? In large part, the answer depends on how consumers react to it. Here are three possible outcomes, using pop culture references as benchmarks.

Obviously, a comparison of the Metaverse to “The Matrix” is a bit tongue-in-cheek. I don’t expect Facebook to enslave Metaverse users and turn them into human batteries. But at its most extreme adoption curve, the Metaverse could become a de facto means for consumers to engage with each other and the world around them.

In this scenario, customers would expect to visit storefronts and search for products in the Metaverse with the same seamless ease they browse the web. Every retailer would need a robust Metaverse presence, with a strong omnichannel back end supporting fast, “real-world” fulfillment of products purchased virtually.

Physical products and brick-and-mortar stores would need to have tie-ins to the Metaverse, similar to what is offered now with QR codes and AR and VR experiences embedded in packaging and signage. Promotions such as “scavenger hunts” where customers search for Metaverse prizes hidden in the physical world would be commonplace.

I see many similarities between the Metaverse and Roblox, the popular virtual gaming site where users create 3-D avatars and engage with other users in a digital world. Roblox is not as immersive as the Metaverse is planned to be, as users are still observing everything that happens to and around them via a device screen.

However, Roblox users can play a wide variety of games where they can create avatars, build homes, and spend “Robux” (in-game virtual currency purchased with real money) to outfit and equip their characters with various items and furnish their virtual homes.

Real-world retailers are starting to set up shop in the world of Roblox, and other similar virtual gaming worlds. Chipotle recently opened a virtual Roblox storefront as part of its “Boorito” Halloween promotion. Customers who visited the virtual store could receive a a free burrito code for use on orders placed via Chipotle.com or the Chipotle app, and also win free costumes and other virtual items for their Roblox avatars.

Teen apparel retailer Pacsun went a step further by making virtual clothing items available in the Roblox Avatar Marketplace. Roblox players can use their Robux online currency to customize their in-game avatars with Pacsun-branded clothing and fashion accessories. The Metaverse may well follow this path, becoming a platform for targeted promotions aimed at a mostly younger consumer base, but not a mainstream commerce channel.

What if they give a Metaverse, and nobody came? Even Facebook is capable of making a mistake; and there is no guarantee that if the Metaverse does come to life, the public will want to spend time there.

In some respects, such as its focus on bringing users together for real-time live interaction, Metaverse is like the failed Google Plus social network. Introduced in 2011 as an alternative to other social networks such as Facebook, it never really took off and was mostly shut down in 2019. Even automatically giving all Gmail email account-holders a Google Plus account could not make people want to go there.

Metaverse also contains some elements similar to the Pokemon Go AR game, which overlaps a virtual world into the “real” world and encourages team play and interaction. While Pokemon Go is still around, you no longer see hordes of people running around with their smartphones looking for virtual Pokemon creatures like you did when it was releasedin 2016. Most retailers do not leverage the Pokemon Go platform, and that may also prove the case for Metaverse.