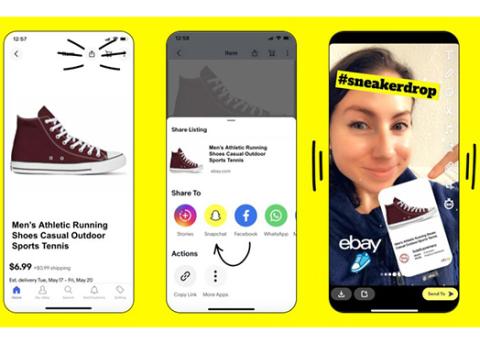 eBay and Snapchat are launching a social commerce partnership.

eBay is teaming with up Snapchat in a new social commerce venture.

Snapchat users can now share eBay listings directly into snaps (Snapchat posts) using the Snapchat Camera feature on Android and iOS devices. To place an eBay listing on Snapchat, consumers first open the eBay app and select any listing. They then tap the “share” icon, followed by a tap of the “Snapchat” option, to automatically jump to the Snapchat Camera with the automated eBay sticker.

From there, consumers can create an original Snap with the eBay sticker, and layer on using any of Snapchat’s creative tools. When a user sends a snap that includes an eBay sticker to their story or directly to their friends, the recipient or viewer will be able to tap the eBay sticker to jump back to the listing directly in the eBay app.

Snapchat gets into commerce
Snapchat has been expanding its functionality as a social commerce platform. In April 2022, the company began rolling out new augmented reality (AR) features on its platform. The company is rolling out a new suite of AR content creation and shopping tools aimed at social commerce, including several that further build upon its Lens platform. These include a dedicated destination on Snapchat called "Dress Up" that lets users try on clothes (virtually).

In May 2021, Snap introduced a number of AR-based shopping features including API-enabled Lenses, which are virtual animations overlaid on a Snapchat photo. Snap also updated the Snapchat Lens Studio desktop application with a number of advanced tools, such as Connected Lenses, which lets consumers interact together in real time.

The new Dress Up feature is available in the Lens Explorer discovery tool (and will soon be placed one tap away from the camera in the Snapchat AR Bar). It allows shoppers to virtually browse, try on and share new outfits. They can also return to favorite outfits and accessories by navigating a new shopping section within their Snapchat profile where they can locate products they have favorited, recently viewed and/or added to their cart. Any brand’s lenses will be considered for Dress Up if they’re available on their brand profile.

eBay explores social commerce
Meanwhile, eBay is also making efforts to integrate its e-commerce marketplace with various social media platforms. The company has partnered with Facebook as far back as 2011. More recently, eBay unveiled a dedicated section of its Pinterest page called The Holiday Marketplace for the 2020 holiday season.

The Holiday Marketplace featured a curated assortment of items from nine small businesses. In further social commerce integration, Holiday Marketplace sellers conducted weekly takeovers of the eBay Instagram page to share expert gift picks for a range of budgets and personas, as well as a behind-the-scenes look into their holiday business.