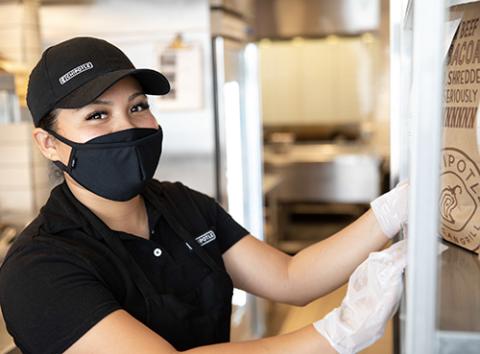 Chipotle Mexican Grill is increasing wages and adding new bonuses as it looks to hire 20,000 employees across the U.S. to support its peak season and staff the estimated 200 locations it plans to open this year.

The quick-serve chain plans to increase restaurant wages to a $15 average hourly wage by the end of June. The wage increases for new and existing hourly and salaried restaurant workers will roll out during the next few weeks, with hourly crew starting wages ranging from $11-$18 per hour. Chipotle said there are also opportunities to advance to the highest general manager position (“restaurateur”), with average compensation of $100,000, in as little as three and a half years.

In addition, the chain introduced a $200 employee referral bonus for crew members and a $750 referral bonus for apprentices or general managers. And in what it called an industry first, Chipotle is launching a crew bonus program that gives restaurant employees the opportunity to earn an extra month's worth of pay each year for meeting certain performance criteria.

The company is going online to recruit employees. It will become the first brand to launch a virtual career fair on Discord, a popular community platform, on May 13 Chipotle's Discord server will feature recruitment content and live sessions with Chipotle employees highlighting its benefits, career paths, cooking demos, and more. Career fair participants will have the opportunity to chat with real Chipotle employees and gain valuable insight into what it's like to work in a Chipotle restaurant.

The pay hike and other incentives comes as restaurants are struggling to fill positions nationwide. Chipotle CEO Brian Niccol told CNBC the current labor market is among the most challenging he has ever seen in his career in the industry. Other restaurant chains, similar to Chipotle, are increasing their recruitment efforts and adding more benefits.

Chipotle offers employees a full suite of benefits, including the chance to pursue debt-free degrees from leading accredited universities in partnership with Guild Education. The company currently covers 100% of tuition costs upfront for nearly 100-degree options at ten learning providers. It also has a 401(k) plan that has a company match of 100% on the first 3% of the compensation an employee contributes and 50% on the next 2%. The match is available after one year of service and 1,000 hours worked.

Chipotle had over 2,800 restaurants as of March 31, in the United States, Canada, the United Kingdom, France and Germany, the only restaurant company of its size that owns and operates all its restaurants

Chipotle provides health and financial wellness resources to all employees. All Chipotle associates and their family members have the opportunity to receive personalized assistance from healthcare experts before, during and following medical needs through a partnership with Health Advocate.