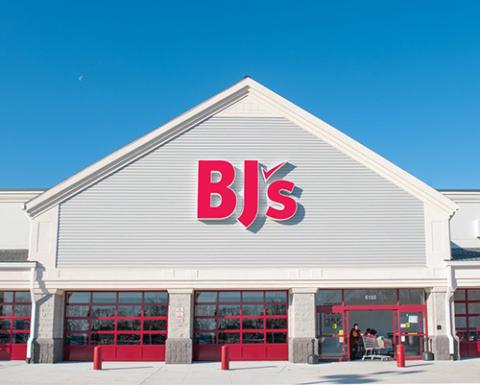 BJ’s Wholesale Club Holdings Inc. has completed the move of its headquarters to a new location.

The membership warehouse club retailer is now situated at a new state-of-the-art facility within its existing headquarters city of Marlborough, Mass. Known as the Club Support Center, the facility incorporates modern, open-space concepts and technology that will serve BJ’s 1,000-plus employees who work in the new location.

These employees, in turn, support the staff and operations of 231 stores in 18 states, as well as 162 BJ’s Gas locations and seven distribution centers.

“Our new Club Support Center will serve as our home base while we continue to expand our enterprise, serve a growing membership of over 6.5 million members and extend our footprint,” Bob Eddy, president and CEO, BJ’s Wholesale Club Holdings Inc., said during a ribbon-cutting ceremony on Sep. 27, 2022, that marked the completion of BJ’s move to its new corporate headquarters. “We are committed to bringing best-in-class talent to our teams to ultimately deliver the value and experience our members expect from BJ’s Wholesale Club. We are proud to call Massachusetts home and are excited for our new facility to support our entire organization and future growth for years to come.”

BJ’s previously announced it would be opening four new clubs as the next phase of its 2022 development plans, including locations in New Albany, Ohio; Wayne, N.J.; and Midlothian, Va.; as well as Noblesville, Ind. All the new clubs will feature a BJ’s Gas station.

BJ’s is on track to open approximately 10 locations this year. In May, the company debuted a new club concept, called BJ's market, in Warwick, R.I. At 43,000 sq. ft., the new format is about half the size of a full-sized BJ’s.

“Our outlook on the business is strong given the sustained strength in our grocery business and our gains in market share,” said Laura Felice, executive VP, CFO, BJ's Wholesale Club, when the company announced its second quarter results. “We expect fiscal year 2022 comparable club sales growth, excluding the impact of gasoline sales, to be in the 4%-5% range, up from our original guidance of low single digit. While we expect continued merchandise margin rate pressure, we also expect fiscal year 2022 EPS to be in the $3.50 to $3.60 range, up from our original guidance of approximately $3.25. We remain confident that the strength of our core business and our intense focus on delivering value will continue to drive long-term growth.”

BJ’s opened its first store in Medford, Mass. in 1984. During the same week as BJ’s Club Support Center ribbon-cutting celebration, BJ’s opened its 231st store in Noblesville, Ind., marking its entry into the 18th state for BJ’s Wholesale Club.