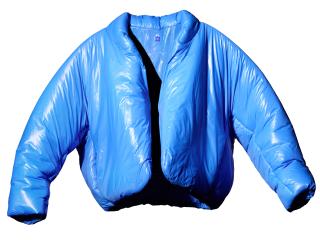 If initial sales are any indication, Gap’s collaboration with rapper-designer Kanye West will more than live up to the hype.

The first product from West’s Yeezy Gap line — a $200 blue puffer jacket made of recycled nylon —  was released early this month and was sold out on Gap’s web site within a few hours. (Shoppers were able to preorder the unisex jacket, which will be shipped later this fall.)  Resale sites are now touting the coat, with prices as high as $1,000.

The Yeezy line with could drive up to $990 million in sales for Gap in fiscal 2022 and boost earnings by approximately $0.50 per share, according to an analysis by Wells Fargo. By fiscal 2026, the line could add about $1.50 per share to earnings, Wells Fargo said.

To quantify what the partnership could mean for Gap, Wells Fargo surveyed 530 Gap shoppers and 470 non-Gap customers to determine their interest in the Yeezy line, reported CNBC. (The survey participants has to know who Kanye West is.)

Key takeaways from survey included  that 64% of Gap customers indicated that they plan to buy Yeezy products and plan to spend on average an incremental $178 on Yeezy/Gap items in the first year. Among non-Gap shoppers, 23% indicated that they plan to buy product from the collaboration. Of this group, 75% said they expect they will purchase other Gap products while shopping.