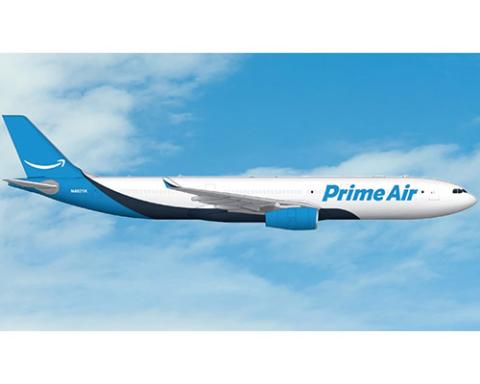 The e-tail giant is leasing 10 Airbus A330-300s through aircraft lessor Altavair. The aircraft, which will be maintained and operated by new Amazon Air partner Hawaiian Airlines, are scheduled to take flight in late 2023.

In 2016, Amazon launched its first delivery aircraft, “Amazon One,” in an effort to transport customer packages across longer distances in shorter timeframes to keep the promises it had made for fast, free Prime deliveries. Amazon introduced Amazon Air to support package delivery using advanced algorithms and software used for capacity and route planning, without relying on third-party shipping providers such as UPS, FedEx, or the U.S. Postal Service.

During the past two years, the company has added more aircraft to its global fleet, which currently features more than 110 planes.

Amazon has also launched a number of new Amazon Air facilities, including a U.S. hub in Hebron, Kentucky and a European air hub at Leipzig/Halle Airport in Germany.

In addition, during summer 2020, Amazon Air announced the purchase of six million gallons of sustainable aviation fuel and has already invested in electric ground service equipment and solar rooftop panels planned at some facilities.

The 10 leased Airbus A330-300s are currently undergoing passenger-to-cargo conversion, and will be the first A330 freighter conversions to operate in the U.S. when they enter the Amazon Air network in late 2023.

At the same time, the company will also begin phasing out some older aircraft whose tenure are nearing expiration. In addition, the new Airbus A330-300s will also be the newest and largest aircraft flown by Amazon Air.

According to CNBC, Hawaiian Airlines will issue warrants for Amazon to acquire up to 15% of its stock. Amazon will have the option to exercise the options during the next nine years. Amazon has executed similar stock purchase agreements with at least two other air cargo providers it works with, ATSG and Atlas.

“These A330s will not only be the first of their kind in our fleet, but they’ll also be the newest, largest aircraft for Amazon Air, allowing us to deliver more customer packages with each flight,” Sarah Rhoads, VP, Amazon Global Air, said in a corporate blog post. “Additionally, we are bringing on a new partner, Hawaiian Airlines, which will maintain and operate these aircraft on our behalf.

“This reflects the results they deliver as a renowned airline with their own A330 fleet,” said Rhoads in the blog post. “We’re thrilled to have these new partners joining us for this next chapter of Amazon Air’s journey, and I can’t wait to watch these birds take flight next year. Now, when I look at our network, I know that we have the structure we need to be nimble when the expected and unexpected, like Hurricane Fiona and Hurricane Ian, occur.”