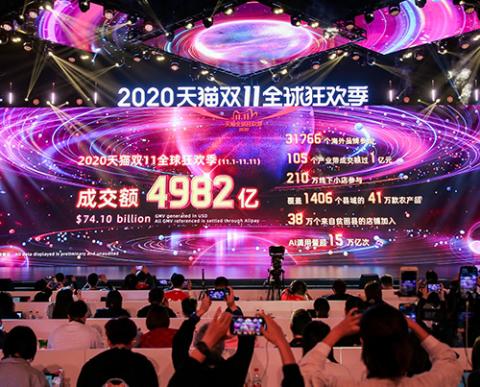 There was no “magic” behind Alibaba’s successful 2020 edition of its Singles Day sales holiday, just a lot of innovative technology.

Alibaba's real-time cloud computing platform, powered by Apache Flink, processed data streams totaling 4 billion items per second during peak time, up from 2.5 billion in 2019. MaxCompute, Alibaba's proprietary data warehousing platform, handled up to 1.7 exabytes (an exabyte is equal to 1 billion gigabytes) of data a day during the 11-day festival from Nov. 1 to 11. No downtime was reported throughout this year's extended festival period.

Alibaba Cloud also supported one of the world's largest container clusters, enabling the upscaling to 1 million containers in an hour. The optimal elasticity and scheduling capacity enabled by the cloud-native technologies led to an 80% reduction of computing resources for every 10,000 transactions conducted compared to the 2016 Singles Day event. In addition, the company used green technologies - including liquid cooling and wind energy – at its five hyper-scale data centers to ensure the most environmentally-friendly operation during the event.

"We were very proud to support 800 million consumers and 250,000 brands during the world's largest shopping festival," said Li Cheng, CTO of Alibaba Group. "From the robust digital infrastructure supporting zero downtime operation, to cloud-native offerings for developers' efficiencies and consumer-facing applications for creating some of smoothest engagement experiences, Alibaba's technologies have once again passed the toughest tests with flying colors."