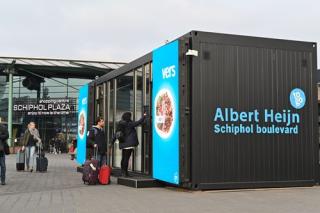 The supermarket giant opened a “digital” store under its Albert Heijn banner at Schiphol Airport in Amsterdam. The store will be open for a two-month trial.

Here’s how it works: Customers scan their contactless debit card to enter. In the store, they pick out the products they want, while sensors keep track of which items have been taken or put back on the shelves. Cameras determine the position of customers without using facial recognition, allowing the store to monitor who is taking what, the company said.

Payment takes place automatically as customers exit the store, without customers having to register in advance or download an app. The payment system was developed with U.S. tech start-up AiFi and Dutch bank ING.

Retail Services, the services company of Ahold Delhaize USA, will demo its checkout-free store at the National Retail Federation Big Show in January.  The store is already being piloted at the company’s office in Quincy, Mass. It features technology developed in partnership with UST Global and Intel.

“Inside the store, artificial intelligence detects which products are being removed from shelves and body skeletal tracking connects the right products to the right shopper,” the company said. “Services such as PayPal, Venmo, Apply Pay and Google Pay are integrated into the wallet."