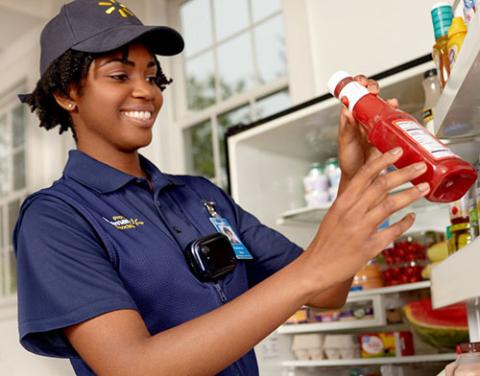 Walmart is offering Walmart+ members delivery to their fridge.

Members of the Walmart+ loyalty program now have a new delivery option.

Starting Wednesday, July 6, the discount giant is making its InHome delivery service, which delivers groceries straight to a customer’s kitchen or garage fridge, is now available as an optional add-on within the Walmart+ program. What were previously two standalone memberships are combined as a single, streamlined offering.

Members of the Walmart+ program, which normally costs $12.95 a month/$98 a year, can now add unlimited fee-free and tip-free InHome delivery for an extra $7 a month or $40 per year. That is $138 annually for both, $10 less than previous annual pricing when Walmart+ and InHome were separate memberships. New customers who sign up for both services also get to have the lower rate of the combined programs.

According to Walmart, customers have been asking to bring InHome into the selection of Walmart+ offerings. As of July 6, Walmart is launching InHome in several new markets, including Miami, Tampa, Orlando, Dallas, Austin, San Jose and San Francisco, nearly doubling the footprint where this service is available.

Walmart says its e-commerce sales grew by 38% over the last two years, and it is ramping up delivery slot capacity by 35% this year to meet growing demand while continuing to expand InHome Delivery to new markets.

The retailer has been bulking up Walmart+, initially launched in September 2020, in the past year. In March 2022, Walmart made the program available free to all full- and part-time Walmart U.S. associates working in the company’s stores, distribution centers and fulfillment centers. This added nearly 1.6 million members to the offering.

“When Walmart+ members ask for something, we work around the clock to make it happen for them,” said Chris Cracchiolo, senior VP & GM of Walmart+. “Our members want options and a shopping experience that is easy to navigate and accommodates their individual needs, while saving them time and money—this is true now more than ever.”

“We know how much InHome members love this service – they see the same familiar faces and build real relationships with our associates, who help them get through their busy weeks,” said Whitney Pegden, VP and GM of InHome. “InHome has one of the highest customer experience ratings in the business, and now we’ve made it even easier to access in even more locations as we grow to reach over 30 million households by the end of the year.”

Based in Bentonville, Ark., Walmart operates more than 10,500 stores and clubs under 46 banners in 24 countries and e-commerce websites.