Under Armour founder Kevin Plank with models wearing the UA-designed base layer and spacesuit.

Under Armour is creating what it calls a “spacewear system” for Virgin Galactic, the commercial spaceline being developed by billionaire Branson. A dedicated team at Under Armour has been working in collaboration with the team developing the flight test program of spaceship Unity at Virgin Galactic to deliver a spacewear system that is safe, functional and comfortable.

The spacesuit consists of several layers. The base layer is designed to act as a second skin to the body, built with Under Armour's new Intelliknit fabric for total moisture and temperature management. The main suit is a deep space blue, with atmospheric light blue elements and pops of gold throughout, inspired by an image of the sun in space, casting its rays on Earth. The Virgin Galactic flight DNA symbols are embedded along the spine, symbolizing the unity of the suit with the mission.

UA Clone, a proprietary auxetic material (which expands in the direction it is stretched) that forms to the exact shape of the body for a precision fit and zero-distraction feel, is used in the elbows and knees for optimal mobility and comfort. Under Armour’s proprietary HOVR cushioning is also incorporated into the shoulder pads and neck area, which are high impact zones during the high G portions of flight.

The liner of the spacesuit incorporates other new fabrics, like Tencel Luxe, SpinIt and Nomex, used for temperature control and moisture management. It also includes functional features such as multiple pockets for necessary and personal items including an integrated solution for communications. There is also a clear pocket on the inside of the jacket above the heart for a photo of a loved one. A patch unique to each mission will be removable from the suit to be attached to the astronaut’s flight jacket for everyday wear.

Finally, the footwear layer modifies the traditional space boot to carry through the same style and design elements as the spacesuit. Taking additional inspiration from racecar drivers' footwear, coupled with Under Armour mimicked the lightweight feel for optimum mobility. UA Clone adaptive technology, also utilized in the spacesuit, forms to the exact shape of the foot for a precision fit and zero-distraction feel, while the UA HOVR cushioning provides support for a functional, comfortable and flame-retardant piece of footwear.

The aesthetic design elements complement the spacesuit, with the shades of blue and gold flashes. The graphic on the sockliner reads, "We Stand on the Shoulders of Giants," inspired by a quote from Sir Isaac Newton that the Virgin Galactic program holds close. In addition, the Virgin Galactic flight DNA symbols and logo unify the full space kit.

"Once functionality and safety was nailed down from a performance perspective, we really wanted to bring the Spacesuit to life with signature Under Armour flair and recognition to Virgin Galactic's noble goals and epic achievements,” said Nick Cienski, principal innovation apparel designer, Under Armour. “We were able to incorporate the nostalgic elements of the classic spacesuit - not only from past space missions, but also iconic space movies - to redefine the way we think of space apparel moving forward and create something memorable and unlike anything future astronauts have ever seen." 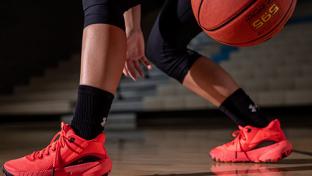 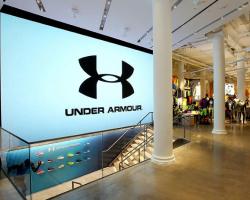 FINANCE
Analysis: Under Armour needs to carve out a more distinct and edgy position 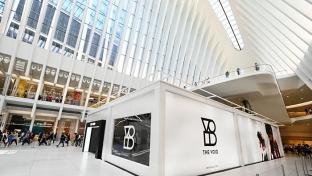 REAL ESTATE
My battle with Darth Vader at WTC Mall