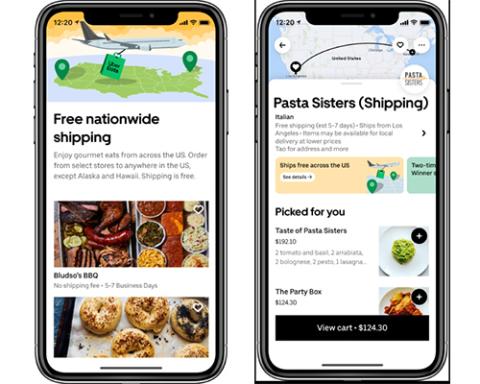 Uber is delivering food orders from select cities to customers across the country.

Uber Technologies Inc. is taking a national approach to what has traditionally been a local service.

According to Uber, during the past few years, especially during the two years of COVID-19 restrictions which decreased travel, consumers have been asking for the ability to have specialty food items from far-off locations delivered to their home. Retailers have also been requesting the ability to diversify their delivery offerings and reach new consumers.

To place a nationwide shipping order, consumers open the Uber Eats app and click the “Nationwide shipping” tile. Once they have selected the retailer they want to order from, consumers then select the item(s) they would like to purchase and add them to your cart.

Customers can confirm their order by viewing their cart and going to checkout, where they review their order details and place the order. Soon after placing an order, customers will receive an email with tracking information from FedEx, its nationwide delivery carrier partner.

Uber Eats is conducting end-to-end food deliveries for customers in Santa Monica, Calif. using Motional all-electric, self-driving Ioniq 5 “robotaxis.” The Motional Ioniq 5 vehicles used in the service have been adapted to enable autonomous deliveries. Upon arrival at the drop-off location, the customer will receive an alert, securely unlock the vehicle door via the Uber Eats app, and collect their order from the backseat.

“Ever gotten home from vacation still craving the pizza you tasted that late night in NYC?,” Uber said in a corporate blog post. “We’ve been there. Ever want to surprise a friend with her hometown bagels from across the country? We’re food people at Uber Eats, and we’ve been there too. Whether you want to send dad barbecue for an upcoming Father’s Day gift or want to celebrate date night with your favorite dish from The Big Apple, it’s never been easier for Uber Eats consumers than with nationwide shipping.”