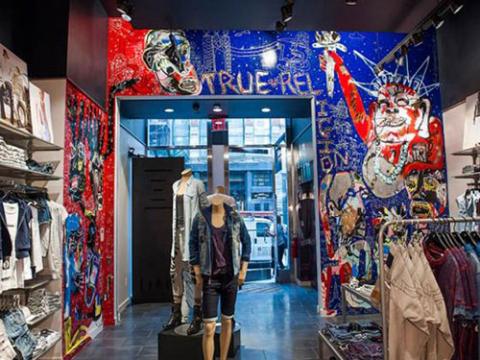 True Religion is shifting focus from stores with a new mobile app.

A premium denim and sportswear brand is launching its new consumer app just ahead of the upcoming holiday shopping season.

According to True Religion, rolling out a new app is a milestone in its ongoing effort to become a digital-first, direct-to-consumer brand. With 80% of True Religion’s e-commerce transactions coming from mobile devices, along with more than half of new visits, the company expects the app to account for 10% of its total e-commerce sales in 2023.

True Religion has previously said that it expects to generate “well in excess” of $100 million in e-commerce sales during 2022, and anticipates that online sales will represent 50% of revenues by 2025, up from 35% in 2021.

As Cyber Week approaches, the company hopes to build on its e-commerce sales during the 2021 edition of Cyber Week, which rose to a record-setting $7 million. These sales represent the largest volume week in the company’s history, reflecting a 45% increase in sales from Cyber Week 2020. The company also announced that during this same period, its online conversion rate and traffic rose 20% and 15%, respectively.

True Religion has also been restructuring its C-suite to focus the company more on digital sales. In July 2022, the company named Sandip Grewal as CFO/COO. He will play a key role in helping True Religion to meet its $500 million revenue goal.

Under McCabe’s leadership, Columbia Sportswear saw a robust 65% increase in active loyalty memberships, according to True Religion, and improved revenue generated by CustomerCare, as well as call abandonment rates, through chatbot integration. In October 2020, True Religion emerged from Chapter 11 bankruptcy protection for the second time in less than three years.

The company created its new mobile app using the poq native app platform. It is available to download in the Apple and Google Play app stores.

“We know that the True Religion customer uses their smartphone to engage with the brand because over half of new visits to truereligion.com and more than 80% of all transactions are from a mobile device,” said Scott McCabe, senior VP, e-commerce for True Religion. “The app will enhance our ability to facilitate a seamless and more direct relationship to our most loyal customers.”