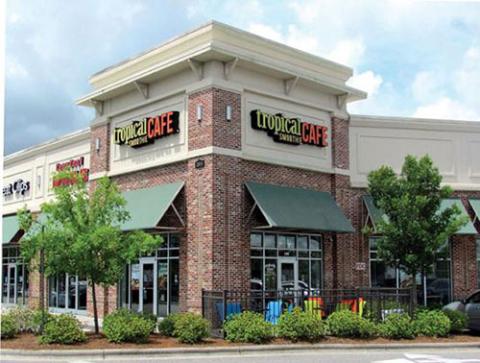 The pandemic has proved no match for Tropical Smoothie Café’s expansion.

The fast-casual café chain has opened its 900th cafe, located on the Fort Benning military base in Georgia. So far this year, Tropical Smoothie Café has signed 214 new franchise agreements, opened 87 new locations across the U.S. and achieved double-digit same-store sales for the past five months, for same-store sales growth of 6.3% year to date.

“It's inspiring to be part of the growth that Tropical Smoothie Cafe has accomplished this year despite the hit the restaurant industry and economy took," said Charles Watson, CEO of Tropical Smoothie Café. "Our franchisees have always been exceptional, but over the course of 2020 they've continued to show us their unstoppable dedication and passion for the brand, our product, and the communities they serve.”

Tropical Smoothie Cafe said the opening of the Fort Benning location was especially meaningful because of its connection with the International Franchise Association (IFA) Foundation's VetFran Program, which provides financial incentives to qualified veterans to open franchises. The location is owned and operated by existing franchisees Reginald and Zenna Foster. Reginald is an Army veteran who served as a telecommunications officer for more than 25 years.

With the opening of the Fort Benning cafe, Tropical Smoothie Cafe also continues its partnership with the Army and Air Force Exchange Service. The new café is the fourth operational AAFES location for the brand with several others in development.