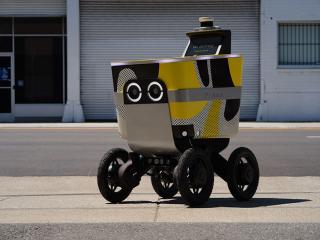 Delivery robots may not be the stuff of exciting science fiction, but they are increasingly a part of real-life retailing.

“The OS1 lidar’s range, size, durability, and high-resolution are a perfect fit for Serve,” said Ali Kashani, VP of special projects at Postmates X. “Over the past few years of development, it has become clear that lidar is an integral component to both detecting and interacting with the world around Serve, and Ouster is bridging that connection.”

Retailers and delivery providers are showing interest in autonomous robots that can quickly make smaller deliveries by traveling sidewalks, as well as full-fledged self-driving cars and trucks. For example, this year FedEx is testing a robotic device called the FedEx SameDayBot with retailers including Walmart and Target.