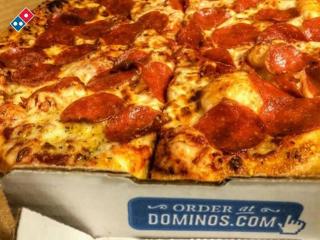 Domino's stores in several markets across the nation will soon have the option to use custom e-bikes for pizza delivery through a partnership with electric bicycle (e-bike) provider Rad Power Bikes. Following successful testing, Domino's will utilize hundreds of e-bikes across corporate-owned stores throughout Miami, Salt Lake City, Baltimore, and Houston later this year.

The e-bikes, which have small integrated motors to assist with pedaling, can run for 25 to 40 miles depending on the user, before needing a recharge. Domino's custom e-bikes include front and rear insulated soft-sided cargo areas, which can hold Domino's insulated heatwave delivery bags, drinks, sides, and dipping cups. One e-bike can hold up to 12 large pizzas. The bikes are equipped with lights in the front and back, reflective materials for driver safety, and have a top assisted speed of 20 MPH.

"Domino's tested e-bikes in a number of corporate-owned stores across Houston, Miami and New York earlier this year, and those stores saw improvements in overall delivery and service," said Tom Curtis, Domino's executive VP of corporate operations. "They also experienced labor benefits, as the stores were able to hire from a wider pool of candidates, including those who might not have a car or driver's license. Plus, stores that were already delivering with traditional bikes saw improved team member satisfaction with e-bikes."

Domino’s has been experimenting with a variety of technology-enabled delivery methods. The pizza chain will start providing autonomous deliveries to select customers who place online orders in Houston later this year. Domino’s will use the custom unmanned vehicle known as the R2 from robotics company Nuro.

And in February 2018, the retailer conducted a two-month driverless delivery pilot in Miami, in partnership with Ford Motor Co. This followed an earlier pilot in Ann Arbor, Mich., that focused on the last 50 ft. of the delivery experience, from car to customer.
Advertisement