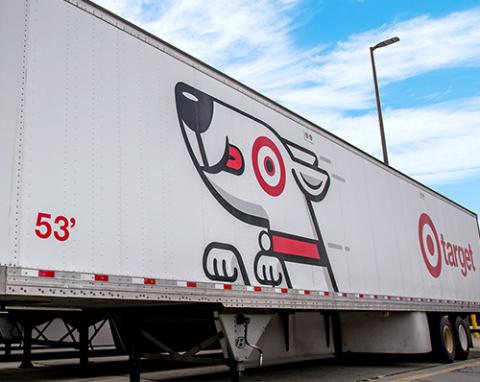 Target is actively working to keep products in stock for the holidays.

As retailers grapple with supply chain problems, Target is confident its proactive investments in fulfillment technology, distribution hubs and 24/7 supply chain operations are paying off as the holiday season approaches.

In a corporate blog post on Thursday, the discounter said its inventory is up “substantially” this year over the same time in 2020. Target attributes much of its success in keeping products in stock, despite continuing backups in the global supply chain, to a number of steps it has taken to improve distribution efficiency in recent years.

These include allocating a significant part of a $4 billion annual investment toward opening two distribution centers, one in Delaware and one in Chicago, during 2021, with two more planned in 2022 to support the east and west coastal areas. And to add capacity to its fulfillment operation and further scale its stores-as-hubs model, Target is opening four new sortation centers in major markets across the country — including sites in Houston, Dallas, the Philadelphia area, and Lawrenceville, Georgia. All four facilities were built after an initial pilot sortation center which opened in Minneapolis in 2020.

Under the sortation center model, when a customer places an order on Target.com, store teams pick and pack shipments, then sort them for delivery partners like Shipt to deliver to customer homes. Sortation centers are designed to make this process faster by retrieving packages as soon as store teams are finished packing and sorting, batching and routing them for delivery to local neighborhoods.

In addition, Target just launched an initiative to hire 30,000 new supply chain employees for the holiday season and beyond.

While Target’s imports comprise less than 3% of container volume in the U.S., the company has been running 24/7 supply chain operations for years, including at the ports, which allows the company to pick up its containers in less than 24 hours. And the nation’s largest ports in Los Angeles and Long Beach, Target says it is currently moving about 50% of its containers at night, and the retailer has committed to increasing that amount by 10% over the next 90 days to help clear up the ports.

Target has also joined a new collaborative program to expand efforts to help with ongoing supply chain bottlenecks and shortages resulting from the pandemic. Initiated by the Biden Administration, the program also includes Walmart, The Home Depot, FedEx and UPS. Target is also a member of national supply chain initiatives including the White House Supply Chain Disruptions Task Force and the National Shipper Advisory Committee at the Federal Maritime Commission.

“Target fully supports investments to increase efficiency at our nation’s ports,” Target stated in its Thursday post. “That includes expanding infrastructure to provide for even more movement of goods and increasing data sharing across industries to help with port traffic control. We also support exploring the expansion of offsite storage for slow-moving containers to allow easier access to containers moving more quickly. The goal? Ensuring we’re doing everything we can to provide our customers and families across the country what they need, when they need it, now and always.”