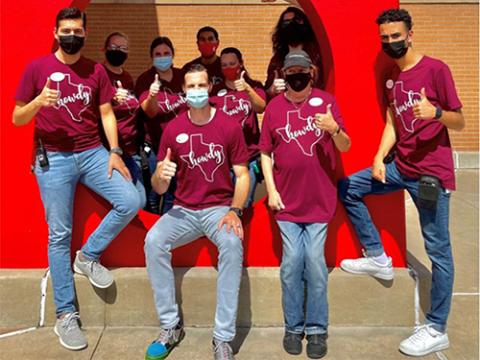 The discounter plans to hire 100,000 seasonal employees at its stores nationwide — about 30,000 less than the past two years — with many of the recruits having the opportunity to stay onboard after the holidays are over. But a key part of the chain’s holiday staffing will revolve around its existing associates, who will be given the chance to work more hours during the holiday period.

Target revealed its hiring plans days after Macy’s Inc. said it plans to hire approximately 76,000 full- and part-time employees at its Macy’s, Bloomingdale’s and Bluemercury stores, call centers and distribution and fulfillment centers. Approximately 48,000 of the roles are for the holiday season.  Walmart has not yet announced seasonal hiring plans, but recently said it is looking to fill 20,000 permanent supply chain roles.

In total, the retailer will offer current store teams an additional 5 million hours. That adds up to more than $75 million in pay, according to the company.  Target has introduced a mobile scheduling app that allows employees to add or swap shifts that align with their schedules.

Target will also add flexibility through its “On Demand” program, which offers team members the option to work more sporadically, picking up occasional shifts that fit their schedules. The program already has more than 20,000 team members and is growing fast, the company said.

“Our strategy is only possible because of Target’s incredible team,” says Melissa Kremer, Target’s chief human resources officer. “We’ve worked to provide our team members with more consistent schedules which means more consistent paychecks and a more consistent way to manage their life. Additionally, we’re offering more hours to team members who want them and continuing our important investment in training and development.”

The areas that will be getting extra attention staffing-wise during the holiday rush include Target’s popular drive-up and order pickup services. (The retailer noted that it has tripled its number of store fulfillment expert roles during the past two years.)  And dedicated employees at Target’s front doors will continue to clean and disinfect carts and baskets between use and focus on other health and safety measures.

“Our store teams continue to step up to serve our guests and communities when they’re counting on us most, time and time again,” says Mark Schindele, Target’s chief stores officer. “They are at the heart of our winning strategy, which is why Target continues to invest in providing training, consistent hours and schedules and support, to take care of them as they deliver for guests and power our business.”

Target and other retailers are ramping up for a holiday shopping season that is expected to see strong growth, with sales increasing as much as 9% over last year, according to forecasts from Mastercard Spending Pulse and Deloitte.