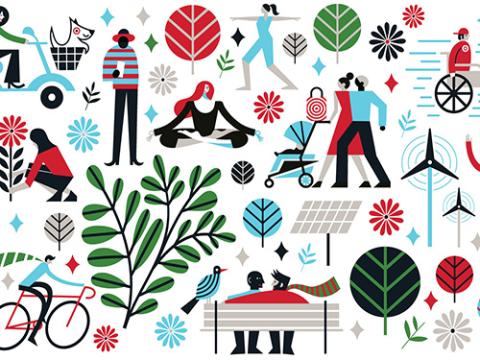 Target Corp. met its 2019 goals to improve the health of supply chain workers, reduce its energy footprint, and boost compensation.

The discounter has released the 2020 edition of its annual corporate responsibility report, which reviews its sustainability efforts during 2019 and into 2020. Highlights are below.

Reducing energy footprint with solar
More than 500 Target stores and distribution centers now have rooftop solar, a goal the company set in 2015 and met in fall 2019, a year earlier than its planned goal of 2020.

Each installation has the capacity to offset between 15% and 40% of each building’s energy needs, helping Target use energy more efficiently and reduce its overall footprint. The result has been generating enough energy annually to power nearly 46,000 homes in the U.S.

Improving worker well-being throughout the supply chain
In 2016, Target set a goal to improve the well-being of 3 million people in the factories and surrounding communities where its goods are produced, and met it in 2019. Target worked with partners across the globe, including VisionSpring, who helped provide eye care screenings and eyeglasses to more than 150,000 workers, and Water.org, which helped provide clean, drinkable water and sanitation to more than 1 million people in India, Bangladesh and Indonesia.

Increasing support of employees
Target accomplished a goal of increasing its starting wage to $15 an hour and also expanded paid family leave to four weeks, including for part-time employees. In 2019, employees volunteered more than 1 million hours for the sixth consecutive year across the country. Target also donated more than the equivalent of 87 million meals to millions of families across the country.

Reducing the environmental impact of packaging and materials
This year, Target is doubling down on its efforts to reduce its products’ environmental impact.  As a member of the Ellen MacArthur Foundation and the New Plastics Economy Global Commitment, Target is committed to ensuring 100% of its owned brand packaging is recyclable, reusable or compostable by 2025.

The discount giant is also transitioning to receipt paper that is free of bisphenol A (BPA) and bisphenol B (BPS), chemicals found in standard thermal receipt paper. By the end of 2020, Target plans fully convert to phenol-free receipt paper across all checkout lanes.

“Our team has shown that even in tough times, we’re able to still continue making progress on creating a more sustainable and equitable future for all,” said Amanda Nusz, VP of corporate responsibility, Target. “It’s both rewarding and humbling to see our collective drive and commitment to further leverage the size and scale of Target to be a positive impact all over the world.”