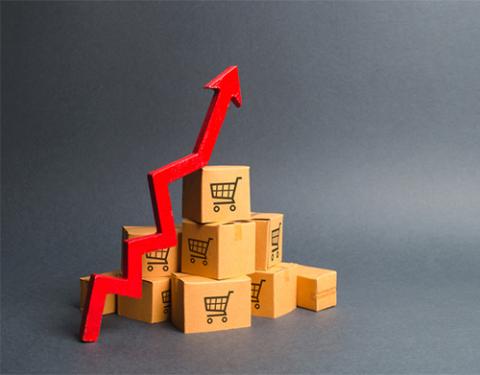 Inflation is hitting home for consumers.

Virtually all U.S. households are taking steps to combat the effects of inflation.

According to the new “Realities & Routines” study measuring inflation and post-pandemic routines from Numerator, 95% of surveyed U.S. consumers report that inflation has impacted their finances. The impact of inflation is four times greater for the 32% of respondents from households that are identified as “struggling” with extremely tight finances and heavy inflation impact.

In addition, 95% of respondents say they are taking steps to combat rising prices. Popular responses to price inflation include stocking up on sale items (51%) and searching for coupons and promotions (50%).

The top inflation reaction for respondents from struggling households is to cut back on non-essential spending (66%).Dining out (59%) tops the list of planned cutbacks for all surveyed consumers, followed by non-essential food (57%), apparel (54%), recreational activities (48%), and travel (42%).

A look ahead
Four in 10 respondents expect inflation’s impact to worsen over the next few months. Among respondents from struggling households, this figure jumps to over nearly seven in 10 (69%) consumers.

The top concerns for the future include world events (22%), the ability to make ends meet (20%), and family issues (15%). Respondents from struggling households are first and foremost worried about making ends meet, with levels of that concern 7.5 times higher than among respondents from other households.

Interestingly, despite these high levels of pessimism, when looking into the future 55% of all respondents report a somewhat or very positive outlook.

Consumers show unease with economy
According to other recently released monthly inflation insights from Numerator, in May 2022, just over one in three surveyed Gen Z consumers (35.5%) reported their financial situation as “good” or “very good” – trailing Millennials and Gen X by 14 percentage points and Boomers and older generations by 17 points.

In addition, that survey showed more than one-quarter of surveyed Asian consumers (25.8%) say they do not have spare cash, and this number grew throughout May among both Hispanic/Latino (24.9%) and Black consumer survey respondents (23.9%). The percentage of surveyed white/Caucasian consumers saying the same has remained flat throughout the past six months (22.1%). Black consumers are significantly more likely than other ethnicities to say they would put extra funds in savings (40.4%) or pay down debts (37.5%).

The Numerator Realities & Routines study is based on a custom Numerator survey and segmentation analysis of over 10,000 consumers.