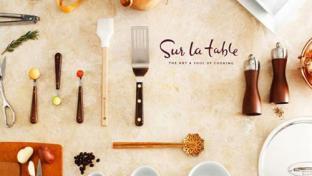 The nearly 50-year-old kitchenware retailer, which filed for bankruptcy in July and said it would close over 50 of its 121 stores, has been sold for nearly $89 million to a  joint venture between e-commerce investment firm CSC Generation and Marquee Brands LLC. The sale, which is still subject to bankruptcy court approval, was first reported by The Wall Street Journal.  According to court documents, the joint venture plans to keep at least 50 Sur La Table stores open.

The joint venture was named the highest bidder at a bankruptcy auction last week, topping an opening big by Fortress Investment Group, according to court documents. Prior to the Fortress bid, it appeared that Sur La Table was headed to liquidation.

Similar to many other retailers that have cited the pandemic in filing for bankruptcy, Sur La Table was struggling before the current crisis amid heavy competition from Amazon and other online players, along with such traditional chains as Target. While its in-store cooking classes have been a big hit, retail sales had been on a downward track, according to reports.