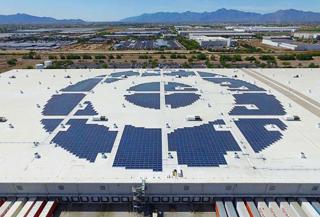 Target Corp. is going all in for clean energy.

Additionally, the retailer has committed to tracking its progress and will source 60% renewable electricity by 2025. This goal builds off its previous renewable energy goal announced in 2017.

As to how Target will achieve its goal, the company noted it is investing in  variety of projects that produce energy through such renewable resources as the sun and wind. It announced two new power purchase agreements, the Lone Tree Wind Project in Illinois and the Sand Fork Solar in Texas. The two projects are estimated to generate approximately 556,000 megawatt hours of renewable electricity—the equivalent of 280 Target stores annually throughout the United States.

In addition, Target is continues to upgrade its facilities to make them more sustainable. It will have rooftop solar panels on 500 of its locations by 2020. (In recognition, Target has twice been named the top U.S. corporate solar installer and is a four-time Energy Star Partner of the Year.). The retailer is also installing electric vehicle charging stations at more than 100 sites across more than 20 states.LED lighting, now in place across nearly all stores, is credited with reducing the chain’s energy usage by 10% annually.

Wind power is also helping the chain meet its goal. Target kicked off its first wind power partnership in 2016, in Lubbock, Texas. In 2017, it contracted for approximately 420,000 megawatt hours of wind energy from the Solomon Forks Wind Project near Colby, Kansas, which is expected to come online in the summer of 2019.

“At Target, we’ve been on a multi-year journey to operate our facilities more sustainably, and setting this ambitious goal is an important milestone,” said John Leisen, VP, property management, Target. “We’re proud of the work we’ve already done with renewable energy in our stores, and we’ll continue to explore more opportunities and partnerships to realize this goal.”