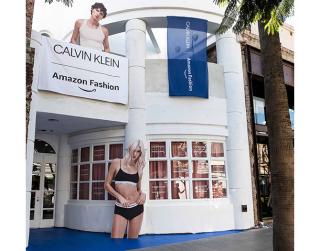 Calvin Klein is teaming up with Amazon Fashion to open pop-ups and sell some items only on Amazon this holiday season.

The pop-ups will sell Calvin Klein Underwear products, including men’s and women’s underwear and loungewear offerings. The online site will also offer an expanded selection of Calvin Klein jean products. The stores and site will include some new, exclusive styles that will not be available in any other channels.

Visitors to the pop-up shops can purchase in store, or they can scan a bar code in the Amazon App to have their items delivered to their home. The fitting rooms will contain Amazon Echo devices, which will allow shoppers to ask Alexa various product questions as well as control the lighting and play music of their choice.

The pop-ups will also feature customization stations where shoppers can have their purchased products personalized with special embroidery. Content creation spaces will encourage shoppers to create their own unique, sharable social media clips. Lounge areas will connect shoppers between the bi-coastal shops via video calling on the Amazon Echo Show, allowing them to interact and exciting content in real time.

“We are proud to collaborate with Amazon Fashion on this exciting retail concept,” said Cheryl Abel-Hodges, head of Calvin Klein Underwear and president, the underwear group of PVH, which owns the Calvin Klein brand. “It is our goal to deliver an immersive and content-driven shopping environment to the consumer, and we are thrilled to introduce this experience to Calvin Klein and Amazon shoppers, both online and offline, just in time for the holiday season.”
Advertisement