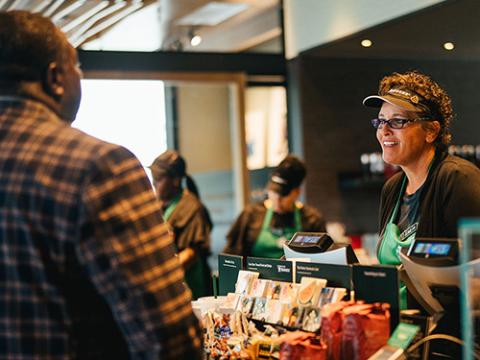 Starbucks had a total of 34,948 stores globally at the end of the third quarter.

Starbucks overcome a host of challenges, including inflation pressures, a union drive and China lockdowns, to beat third-quarter expectations.

Howard Schultz, who took the reins of Starbucks on an interim basis in March, said the company has not yet seen any impact from inflation, despite increasing prices.

“While we are sensitive to the impact inflation and economic uncertainty are having on consumers, it’s critically important that you all understand we are not currently seeing any measurable reduction in customer spending or any evidence of customer’s trading down,” Schultz said on the company’s earnings call.

On the call, Schultz also said the chain has narrowed down its list of potential CEOs. He said that he will stay as long as necessary to ensure that the new chief executive “has a soft landing.” He then will transition to the board.

Starbucks said the 90-day active members in its U.S. rewards loyalty program rose to 27.4 million, up 13% compared to a year ago.

The company opened 318 net new stores during the third quarter, for a total of 34,948 stores globally, with 51% company-operated and 49% licensed.

“We have clear line of sight on what we need to do to reinvent the company, elevate our partner and customer experiences and drive accelerated, profitable growth all around the world,” said Schultz. “The Q3 results we announced today demonstrate the early progress we have made in just four short months.”

Schultz spoke of the need to reinvent the chain for its “next chapter” in a letter to employees in July.

In May, Starbucks announced it was investing $1 billion in new wage hikes, employee training and store innovation. The move came as the company found itself challenged with a growing union push. To date, approximately 200 of Starbucks's approximately 9,000 U.S. stores have voted to unionize.