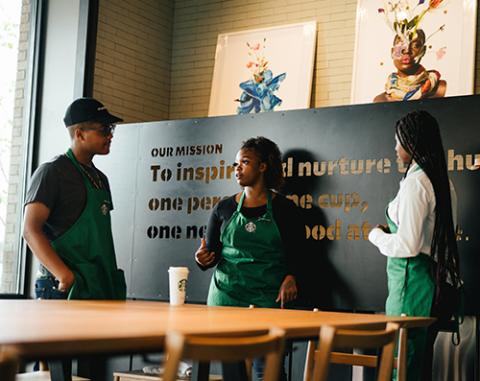 Starbucks Corp. is expanding its commitment to operating stores in underserved urban and rural areas.

Five years after the launch of its community store initiative, the coffee giant announced it is expanding its commitment by 85 stores, with a goal of opening 100 locations by 2025 in underserved rural and urban areas across the country. Currently, Starbucks operates 14 community stores, including sites in Trenton, N.J., Jonesboro, Ga., Long Beach, Calif., and Bed-Stuy in Brooklyn, N.Y. To meet its new goal, Starbucks will focus on store remodels in addition to new development projects.

“These stores are successful and it’s time to expand the model,” said John Kelly, executive VP of public affairs at Starbucks. “Over the last five years, we’ve seen these community stores empower our partners and customers to create meaningful impact that is localized and relevant to their neighborhoods. We’ve learned a great deal from our 14 community stores and applied those learnings to how we approach community partnership in more than 8,000 neighborhoods we serve across the country.”

The community stores will include a designated room or space for community events and programming, a partnership with a local United Way chapter to facilitate relevant community programs and an emphasis on hiring locally. Starbucks said it will work with diverse contractors for store construction and remodels.

To date, Starbucks estimates its community stores have helped:

As part of Starbucks national partnership with United Way, local United Ways and 211s in targeted communities will work with community store partners to create resources and programs for each community. That includes facilitating activities at the stores that support people in the community, providing Starbucks partners with customized community profiles and resource information and connecting partners with volunteer activities that help create real change in the communities in which they live and work.

In addition to announcing the expansion of its community stores, Starbucks also announced that The Starbucks Foundation has awarded more than 1,000 Neighborhood Grants, a new giving program that creates local impact and empowers store partners to strengthen relationships with local nonprofit organizations. To date, hundreds of store managers have secured more than $1 million in grants from The Starbucks Foundation for more than 1,000 local nonprofit organizations in all 50 U.S. states and all Canadian provinces.