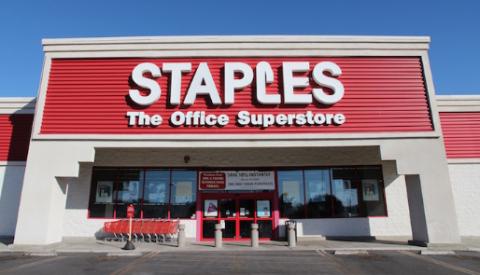 Will the third time be the charm for Staples?

USR Parent, the parent company of Staples, has made an unsolicited $1.0 billion bid to buy the consumer business of ODP Corp., including its approximately 1,100 Office Depot and OfficeMax retail stores, the company's direct channel business (officedepot.com), and the Office Depot and OfficeMax intellectual property, including all brand names.  It’s the latest effort by Staples to acquire its rival.

USR, an affiliate of Sycamore Partners, sent a letter to ODP's board of directors proposing the acquisition, offering $18.27 per share, which it said represents a premium of about 43% to the 30-day average closing price of ODP’s share as of June 2.

"We believe our proposal represents a compelling opportunity for [ODP] and its shareholders," USR wrote in its letter. "We look forward to working with the company to negotiate and sign the necessary definitive agreements for the proposed transaction, and to proceed to closing the transaction as soon as practicable.”

In May, ODP said it would split its retail and business-to-business divisions into two publicly traded companies to allow the two companies to focus on their respective areas of expertise while also unlocking shareholder value. The split was seen by some as potentially opening the door for Staples to buy its longtime competitor.

Under the plan, ODP retains its retail consumer and small-business products and services division. The company’s Business Solutions Division contract business and independent regional office-supply distribution operations will be spun off as a new and separate company.

The move came as Staples continued to pursue its acquisition of Office Depot. In January, ODP turned down an offer by Staples to buy the company for $2.1 billion in cash, saying it was unlikely to overcome regulatory challenges. But in a letter detailing its response and rejection of the offer, ODP also said it was open to a reworking of the deal, including combining their retail operations.