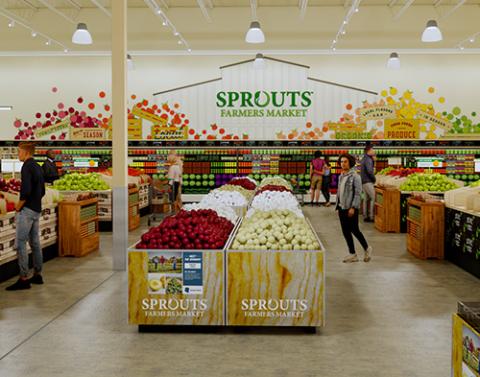 Sprouts Farmers Market has its eye on Florida — and smaller stores.

The organic grocer will open some 20 stores this year, including 10 in the Sunshine State where it currently operates 23 locations. Four of the openings planned for this year will feature Sprouts’ updated smaller-store format, which averages 25,000 sq. ft. Sprouts plans to feature the format in more locations next year.

“This year, Sprouts will densify its footprint with more stores opening in California, Florida and Texas,” said Dave McGlinchey, chief format officer, Sprouts. “We’re excited to introduce our newest format in four stores in the second half of 2020 and plan to feature this format with even more stores next year, when we will be expanding at unit growth of 10% or more.”

The smaller format will be featured in new stores planned for Dania Beach, Fla.; Grand Prairie, Texas; Smyrna, Ga.; and Phoenix.  Also, Sprouts’ store in Tustin, Calif., will be remodeled this year with the new layout.

“The smaller size is very efficient and keeps produce at the heart of the store while maintaining our familiar open layout that will offer more assortment of products for a treasure hunt shopping experience,” McGlinchey said.

In addition, Sprouts will also open two new local produce distribution centers this year, one in Aurora, Colo., in March and another in Orlando, Fla., later in the year. The new centers will drive supply chain efficiencies by positioning stores within 250 miles of the centers.

Sprouts currently operates 362 stores in 23 states. Future stores are planned to open this year in the following locations.