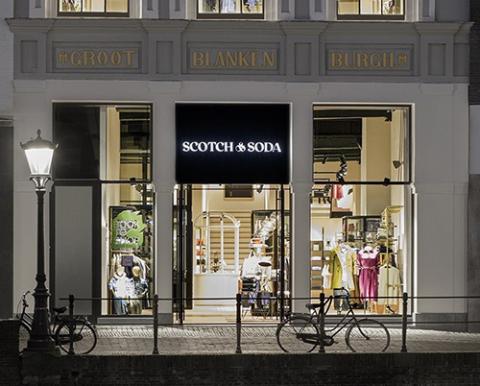 Scotch & Soda is growing its portfolio around the globe.

The Amsterdam-born fashion brand for men, women and kids will open 15 stores during the next six months, part of its three-year strategic plan to open at least 100 new stores and remodel at least 150 locations by the end of 2023. It also is launching a new brand logo.

Along with the 15 new doors, Scotch & Soda plan to open 12 shop-in-shops this year, adding to its existing network of 225 stores and 161 shop-in-shops. The expansion will include the introduction of a new "free spirit" store concept that highlights the retailer’s new brand identity.

Following the openings of two stores in California in January, Scotch & Soda will open a location in the Seaport District of Boston in September. The retailer, which has 43 stores in North America, is currently looking into securing additional locations in key cities in California, North Carolina, and Pennsylvania.

In addition to the United States, Scotch & Soda will open stores this year in the Netherlands, Germany, France, Poland, Ukraine, Qatar, UAE and Kuwait. It will also enter a new market, Israel. In Asia-Pacific, a franchise will open in April in Mumbai, India, as well as in October in Perth. The brand will also add new showrooms and offices in Shanghai and Milan this spring.

Each Scotch & Soda store is unique, blending the original architecture and characteristics of each building with the brand's new design concept. All facades and interiors will carry the new brand identity and play on muted tones, combined with pop accents of sunshine yellow, rose pink and burgundy. Custom fixtures in aged brass, textured tiles, marble, powder-coated steel and a custom bar along with vintage furniture and wallpapers designed in-house complete the new design concept.

All new stores will be fitted with LED lights, FSC wood herringbone flooring, new hangers made of recycled materials and selected soft furnishings such as sustainable rugs woven in Econyl, which is made entirely from ocean and landfill waste

The new brand logo embraces the symbol of unity at the heart of Scotch & Soda's name, which embodies the free spirit of Amsterdam, blending its iconic ampersand with the brand's initials. It also includes a nod to the craftmanship that goes into the company’s apparel offerings by following the delicate movement of a thread attached to the eye of a needle. The new identity will debut on the brand's social media channels, website and dedicated app, as well as in several new stores, before launching on collections in November.

“We are relentlessly optimistic about the future and the next chapter of the brand and its story based on the profound values of unity that drive the unique spirit of Amsterdam,” said Frederick Lukoff, CEO.

Scotch & Soda operates 225 freestanding stores across Europe, North America, Asia, the Middle East, Africa and Australia. Its product is also available in some 7,000 doors in some of the world's biggest cities, including New York, London and Paris.