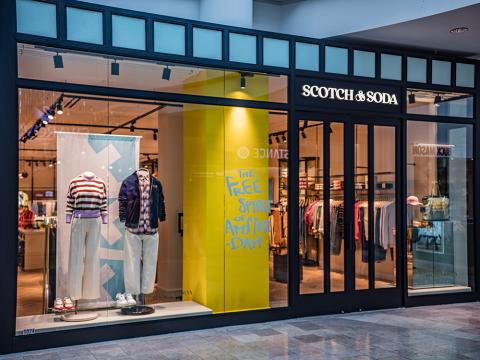 Scotch & Soda growing its store network — in the U.S. and abroad.

The Amsterdam-based, women’s and men’s fashion brand will open 20 new stores globally during the next six months. The openings will include the upcoming launch of flagships in Milan and London, which will rank as the company’s largest European stores outside of The Netherlands.

The new round of expansion will also include stores in Washington D.C., and Boston, marking the 50th Scotch & Soda location in North America, as well as in Frankfurt, Dubai, Doha, Tel Aviv, Johannesburg, Cairo, Shanghai and Beijing. The new expansion follows the recent opening of 16 stores globally during the past six months.

Additionally, Scotch & Soda will continue to roll out its rebranding strategy this year, with the retrofit of existing stores under its new "Free Spirit" design. The concept combines warm colors and sleek design elements to connect the expected with the unexpected, and includes sustainable features such as LED lighting, FSC-certified wood herringbone flooring and hangers made of recycled materials.

North America
Scotch & Soda’s recent U.S. store openings include a store at Fashion Square, in Scottsdale, Ariz., and one in Boston's Seaport neighborhood.

In May, the retailer will open in the Union Market area of Washington, D.C., followed by a mid-June opening at the Somerset Collection, in the Detroit suburb of Troy, Mich. In July, the brand will open a location at La Cantera, in San Antonio in July. 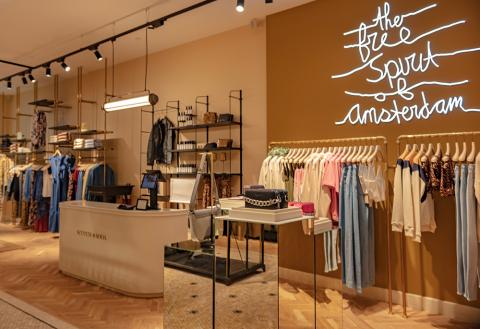 At the end of last year, Scotch & Soda opened locations at King of Prussia shopping mall, King of Prussia, Pa., and at SouthPark, Charlotte, N.C. By the end of September this year, the brand's store count in North America will reach 50 locations, including 46 in the United States and four in Canada.

Europe
Following the opening of a new showroom in Milan last year, Scotch & Soda will open a flagship store in Via Alessandro Manzoni, one of Milan's most prominent fashion destinations. Slated to open in early June, the store will have a sales area of some 2,000 sq. ft.

Scotch & Soda expands its presence in the United Kingdom, with the launch of its third brick-and-mortar address in London this summer. The 2,700-sq.-ft. flagship will be located in the city’s Covent Garden area.

In France, the brand will open two stores in the northern cities of Rennes and Rouen mid-May, and a store in Besançon in August. As of September this year, Scotch & Soda will have a portfolio to 31 stores in France.

Scotch & Soda continues to expand its retail presence in Germany, with the openings of new locations in Frankfurt in February and in Cologne last month. Upcoming openings include a new location in Augsburg in June, bringing the brand's store count in the country to 42 by the end of September 2022.

Additionally, Scotch & Soda will open a new store in the Emporia shopping centre in the Swedish city of Malmö in June.

Middle East and Africa
Scotch & Soda pursues its expansion in the Middle East with the recent opening of its ninth store in Saudi Arabia, at the Riyadh Park Mall. This follows the opening of a store in Dammam's Nakheel Mall at the end of last year.

In the United Arab Emirates, Scotch & Soda opened a store in the Dubai Hills Mall in February, and will open in the Marina Mall in early May, for a total of five locations in the country. Scotch & Soda will also open its second address in Qatar in April, at the Place Vendôme shopping centre in Lusail.

Additionally, the brand has opened its second store in Israel, in the Ramat Aviv Mall, in Tel Aviv. This follows the opening of Scotch & Soda's flagship store in Tel Aviv's Shenkin street last year.

RFID
The acceleration of Scotch & Soda's global retail network will be combined with the brand's omnichannel and unified commerce ambition, to be completed in the fall of 2022. This follows the integration of RFID technology in partnership with Nedap for stock level optimization, as well as the opening in September of this year of a new warehouse in Hoofddorp, in the outskirts of Amsterdam. It will include a roof entirely fitted with solar panels and automatically irrigated vertical gardens.