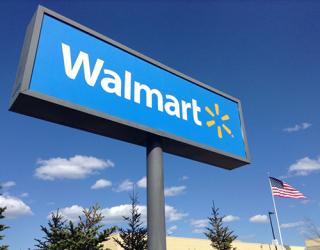 Walmart will pass along some supply chain costs.

Walmart will reportedly be sharing the cost of supply chain inflation with some of its partners.

According to Reuters, a corporate memo from Walmart U.S. executive VP and COO chief merchandising officer Chris Nicholas indicates that beginning Aug. 1, 2022, suppliers that have the retailer pick up their merchandise via the Walmart Collect program will pay surcharges. The extra fees will consist of a pickup charge based on the cost of goods received, as well as a fuel surcharge which will fluctuate daily with changing prices.

"This program is a result of Walmart adapting to the significant transformation and increased costs seen in the transportation industry over the past few years," said the memo. Walmart addressed the memo to its “Valued Collect Suppliers” and initially sent it on Friday, July 1.

Walmart acknowledged the veracity of the memo in a statement to Reuters.

"The Collect program positions Walmart and participating suppliers to adapt to the dynamics of the current economic environment," a Walmart spokesperson told Reuters.

John Furner, CEO of Walmart U.S., publicly said in June 2022 that the company would need to pass along some fuel and transportation costs in its supply chain to its supplier partners.

Walmart in big earnings miss amid higher product, supply chain costs
Walmart is taking this step following a first quarter that saw increased costs for food, fuel and wage take on a toll on profitability even as sales continued to show momentum. Despite rising revenue, comp sales and e-commerce sales, the retail giant posted net income of $2.054 billion, or $0.74 per share, for the quarter ended April 30, down from $2.73 billion, or $0.97 per share, in the year-ago period. Adjusted earnings per share of $1.30 missed analysts’ estimates of $1.48. The retailer cited U.S. inflation levels, particularly in food and fuel, as creating more pressure on margin mix and operating costs than it expected.

Amazon adds surcharge to some sellers' fees
Chief Walmart rival Amazon also recently adjusted some of its supply chain fees to account for rising costs. Since late April, the e-tailer has been applying a 5% fuel and inflation surcharge to existing Fulfillment by Amazon (FBA) hosted fulfillment fees for Amazon Marketplace participants selling in the U.S. Amazon said the surcharge is subject to change.

“In 2022, we expected a return to normalcy as COVID-19 restrictions around the world eased, but fuel and inflation have presented further challenges,” an Amazon spokesperson said at the time in an email to CNBC. “It is still unclear if these inflationary costs will go up or down, or for how long they will persist, so rather than a permanent fee change, we will be employing a fuel and inflation surcharge for the first time — a mechanism broadly used across supply chain providers.”

Based in Bentonville, Ark., Walmart operates more than 10,500 stores and clubs under 46 banners in 24 countries and e-commerce websites.