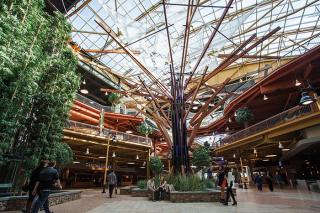 Daybreaker continues its countdown of the Top 10 Retail Center Experiences named in the July-August edition of Chain Store Age.

Winter in Syracuse, on the southern shore of Onondaga Lake, sees average temperatures in the teens. It’s a windy and snowy cold, too, with the so-called “lake effect” depositing an average of 115 inches of the white stuff a year on the town best known as the home of Syracuse University. It is also the home of Destiny USA, which achieves the seemingly impossible mission of attracting 25 million people a year.

The 2.4 million-sq.-ft. property has an entire level dedicated to dining and entertainment. Its Canyon area sports the world’s most extensive indoor ropes course. It has more than 40 dining and drinking establishments and an IMAX theatre. Its 250 shops range from dollar to deluxe. Where else under one roof might one find a Pottery Barn and a 99¢ City? A Francesca’s and a Burlington? A Carhartt and a Brooks Brothers? And with six full-service jewelry stores, it rivals New York’s 47th Street as the place to buy an engagement ring.

“It’s been far more wildly successful than we’d ever hoped,” said Stephen Congel, CEO of Syracuse-based Pyramid Management, owner and operator of Destiny USA, who credits an 855,000-sq.-ft., turn-of-the-century expansion for making it what it is today.

Destiny USA advertises heavily in New York State, Pennsylvania, and Canada, promoting multi-day packages that include stays at the Embassy Suites Destiny Hotel. But Congel said its visitors hail from all over the globe as well as all 50 states.

It may not be destiny to deliver that many people to remote and often blizzardy Syracuse, but it is something on the order of a retail real estate miracle.


Stay tuned for daily profiles of the next four centers. Until then, catch up on what you missed:

No. 1 Easton Town Center
No. 2 Northpark Center
No. 3 Avalon
No. 4 Westfield Garden State Plaza
No. 5 Mall of America
Advertisement