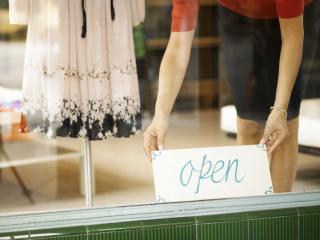 It’s every retailer’s dream to enter a new space or new market and have their concept truly pop with customers. But this isn’t always easy or a given.

As urban environments have become the center of attention for retail and mixed-use development momentum, retailers and developers alike are slowly getting better at overcoming some of the inherent challenges associated with denser urban locations. Recognizing that hard-and-fast brand standards for store layout and design aren’t always compatible with the structural and operational limitations of older and unconventional urban spaces, retailers are becoming more creative and flexible, learning to adapt to everything from different floor plans and materials, to ceiling heights and store depths.

Retailers and developers can better adapt to urban retail and mixed-use environments through the use of pop-up shops and temporary stores. Pop-up spaces are beneficial in testing the waters for retail concepts and spaces, where retailers are essentially dipping their toes into the pool of a market or specific location. Typically open for an incredibly limited (often predetermined) period, these store designs bring a simple white box to life with a focus on fixtures and product presentation — as opposed to a true retail buildout.

The advantages of the pop-up approach are intriguing — and significant. Pop-ups allow brands and businesses an opportunity to assess the viability of a retail concept, evaluate market interest in a product or service, and determine whether a specific location holds sufficient promise to warrant a larger and longer-term investment in a permanent store. Pop-ups are cost-effective and flexible, giving retailers the ability to move not only to new markets, but to different spaces with unique designs within those markets.

Entrepreneurs recognize the popularity and potential of redeveloped and reinvigorated urban environments, but there is still some perceived risk in markets that are viewed as unproven. Pop-ups offer the ideal compromise: a way to ride the wave of dynamic redevelopment and consumer enthusiasm without the possibility of a total wipeout.

Detroit has quite a bit of action in the pop-up arena. Detroit commercial real estate firm Bedrock has recently taken the pop-up approach to the next level with the Downtown Detroit Markets, a temporary “village” of glass hut pop-up stores that housed 30 retailers last winter from November to January. The space, near Campus Martius and Capitol Park, attracted more than 30,000 visitors over the winter, who spent an estimated $2 million. The concept was so popular and successful that Bedrock brought it back this summer — with an expanded market space featuring 500-plus stores now open from April through September.

This trend doesn’t have to be limited to a city like Detroit. There is potential on a national scale, especially in downtown areas and environments with a unique urban-feel to the space. However, Detroit is just one example of a place — with so many neighborhoods in flux and in the midst of an ongoing civic renaissance — particularly well-suited to the pop-up phenomenon.

The design aesthetic in pop-up stores tends to have more of a crafted, almost homemade, do-it-yourself feel — as opposed to the polished, factory-manufactured fits and finishes you’d expect in a more established retail space. This syncs nicely with the kind of authentic character-filled spaces and experiences that consumers are looking for (and finding) in more urban locales. It also helps makes pop-ups a good fit for any number of unconventional retail environments, including places like airports, rooftops, and even mobile food-truck style concepts. Pure Barre, one retailer embracing the pop-up mentality with spare spaces and frequent pop-up classes, regularly does things like host pop-up barre classes in unconventional places, like the rooftop of the Restoration Hotel in Charleston, South Carolina.

For their part, developers would be wise to recognize the enthusiasm for pop-up retail (from consumers, and store owners and operators) and respond proactively by creating spaces easily used for pop-up retail. Instead of building a gray box and waiting for a tenant to proceed, developers can go further and create white boxes and spaces ready-to-go as pop-ups.

Pop-ups not only help fill vacancies, they also generate additional foot traffic, publicity and energy around a new development, helping a new project hit the ground running. The ability to experiment isn’t limited to retailers: pop-ups allow developers to take chances with retail concepts that might be slightly out of their comfort zone, finding new ways to add vibrancy and dynamism to their tenant mix. When done right, the result is a win for consumers, retail entrepreneurs and developers.

The pop-up concept can elevate the customer experience and create a buzz for months and years ahead. Developers and retailers who want to leverage the pop-up phenomenon to their advantage should get out in front of this trend and embrace the pop-up possibilities.

Bob Kraemer is a co-founder and principal of the Detroit-based Kraemer Design Group. He can be reached at [email protected].
Advertisement