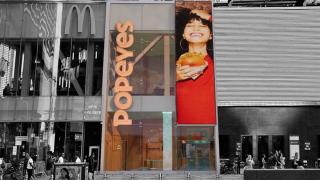 Popeyes is celebrating its 50th birthday by continuing its rapid expansion across North America and rolling out tech innovations.

The quick-serve chain  plans to open more than 200 locations in the U.S. and Canada in 2022, including a flagship in Times Square in New York City. The new round of expansion follows a record 2021 during which Popeyes opened 208 sites.

Scheduled to open in June and located at 1530 Broadway, the Popeyes Times Square outpost will feature a new modern design that pays homage to the brand’s Louisiana heritage and Cajun roots.  It will also offer new technology innovations, including self-order kiosks, a two-story food transporter for upstairs dining, digital order ready boards and a merchandise store for collecting swag.

Popeyes also recently re-opened its New Orleans flagship on Canal Street. The 200-year-old landmark building has been renovated and refreshed and features the domestic debut of the chain’s bold NOLA Eclectic image that was unveiled in Shanghai plus a custom storefront for themed merchandise. The company-operated store is prominently located on the Mardi Gras parade route for maximum brand presence.

On the global front, Popeyes, which has a total of 3,700-plus locations around the word globally, is also opening restaurants in new markets that include  South Korea, France, India, and Romania. It’s also expanding its presence in existing markets, such as China, the U.K., Spain, Brazil, Philippines, Mexico, Saudi Arabia, Vietnam, Switzerland, and Sri Lanka.

Popeyes is also reconfiguring and launching new back-of-house technology solutions for kitchen designs this year. The company has created a new building design to help meet volume and customer demand, with new kitchens and systems designed from the ground up to be more efficient and capable, and also a better place to work. This includes piloting and launching technology solutions that enable improved restaurant operations, making the team members’ job easier and improving labor efficiency.

The company is also fueling its digital growth through such features as mobile order and pay, curbside pickup, digital order pickup shelves and self-order kiosks and making Popeyes Rewards available on its app. This year, the program will feature exclusive benefits that make the experience for the customer more valuable.

Additionally, more than 50% of the restaurants in Popeyes’ 2022 pipeline will include double drive-thrusto serve increased traffic and boost speed of service.