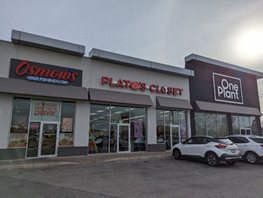 Plato's Closethas opened its 500th location, in Windsor, Ontario. The retailer, which specializes in used apparel and accessories for teens and young adults, is a subsidiary of Minneapolis-based Winmark Corp., which also owns and franchises Play It Again Sports, Once Upon A Child, Style Encore and Music Go Round.

Since 2016, the resale sector grew 21 times faster than its traditional retail counterpart —  and its growth doesn’t appear to be slowing any time soon, according to a report by Winmark. Now a $24 billion market, resale is projected to more than double in the next five years, reaching $51 billion in revenue by 2024. (Apparel concepts make up 50% of resale’s market share, but the segment also includes businesses reselling quality used products such as musical instruments, sports gear, furniture and home goods.)

“500 Plato’s Closet locations is a huge accomplishment and a testament to our collective efforts with our franchise partners, their employees, and the team at Winmark to achieve this milestone,” said Renae Gaudette, COO. “To see the impact that this brand has had on our franchise partners and their communities is inspiring.”

Winmark is actively seeking to grow Plato’s Closet. The brand has pinpointed Sacramento, Los Angeles and Boston for immediate expansion.

Plato’s 500th store is franchised by multi-unit franchise owners Scott and Lisa Doerr. The Doerr family have been involved with Winmark brands since 1999 when Scott’s parents opened their first Once Upon A Child in London, Ontario.