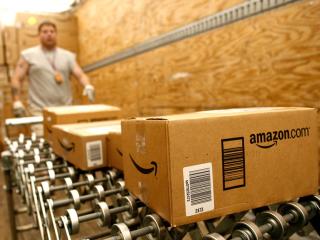 Although Amazon's sales advanced by a respectable 23% over the quarter, the pace of growth at the online behemoth remains much slower than it was over most of the prior fiscal year. Some of this is the result of a less favorable exchange rate diluting contributions from the international business. However, some is also down to a more challenging demand environment in North America which has limited spending uplifts on products within Amazon's core territory.

While retail sales growth has slowed, Amazon's retail service revenue — which includes Prime subscription fees - jumped by almost 50% over the prior year. A rise in subscriber numbers in North America and the roll out of Prime to new territories like Mexico have both underpinned this trend.

More modest product sales uplifts combined with high Prime subscription growth has resulted in a significantly narrower gap between shipping costs and shipping revenues; this boosted operating income within North America, albeit only to a small degree.

Unfortunately, such a pattern was not replicated on the international front where an unfavorable exchange rate plus extensive investments in new services and initiatives dramatically increased operating losses.

Ultimately, the rise in international operating losses outweighed gains made closer to home, which resulted in a 6.2% dip in overall group operating income. As disappointing as this is, we do not believe this is a cause for too much concern — if only because the investments Amazon is making will pay dividends over the longer term.

The expansion in India exemplifies the opportunity Amazon has in newer markets. Here, the recent launch of Prime, the development of a Fire Stick optimized to the market, and investment in logistical and selling infrastructure have all helped to make Amazon the fastest growing marketplace in the country. Given the future scale and scope of Indian e-commerce, the investments are prudent and will make an extremely healthy contribution to overall growth in the years ahead.

As Amazon splurges to forge ahead in new markets, greater profit stability in its home market arguably becomes more important. Even though the company's margins remain thin, a firmer grip on fulfillment costs is currently helping to deliver this.

That said, we believe that there are some future risks in North America — most notably from the more aggressive e-commerce push coming from Walmart and, to a lesser extent, other traditional players.

Against this backdrop, it is essential that Amazon maximizes its potential in areas and categories where it is currently underweight. This includes fashion where we are encouraged by the new development of private labels such as Goodthreads and Lark & Ro. Although these are embryonic, they provide Amazon with the building blocks to develop a much more compelling, and slightly higher-margin, fashion proposition which will help it to grab market share profitably. This will be aided by new technology such as the Echo Look, which will help Amazon to sharpen its fashion credentials and services in a way that is challenging for other players to imitate.

As much as we are encouraged by Amazon's drive into categories like fashion and home, we are more hesitant about the Amazon Fresh business. As much as we believe this has solid long-term potential, we think the logistical complexities and the low margin nature of grocery mean that it will be an expensive drag on profits for the foreseeable future.

As other players become more aggressive about e-commerce, we think life will become a little tougher for Amazon. While we do not see any significant material damage to the firm, we do think sales and margin growth could be crimped over the medium term. However, we believe that in the short-term damage will be limited by the fact that Amazon has created a very successful ecosystem of content and technology; this will support Prime subscriptions which, in turn, help make Amazon the destination of choice for buying products.

However, sustaining this into the longer term will require Amazon to maintain its pace of innovation. While current trends suggest Amazon is more than capable of doing this from a technical and creative standpoint, we believe that such action will also constrain profit growth.

As such, while the overall outlook for Amazon is extremely positive, we maintain our view that the company's growth and success will continue to come at the expense of the bottom line.
Advertisement