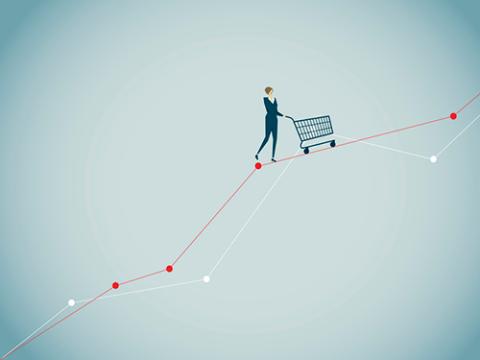 Consumers expect inflation to grow 5.8% during the next year – less than in 2021 but above pre-pandemic levels.

Inflation is at a 40-year high and isn’t hitting all consumers as hard as top-line numbers might suggest. But it will still play a key role.

That’s according to National Retail Federation chief economist Jack Kleinhenz, who said that headline inflation numbers may mask what is being faced by different consumers since spending patterns vary widely and lead to significantly different inflation experiences.

“What a person buys can have a tremendous effect on how severely the pain of inflation is felt,” he explained.

Older households, for example, spend more on health and medical services than younger households, which spend more on education and communications like technology or TV streaming services. In addition, some spending that drives inflation consists of infrequent big-ticket purchases like a car (up 12% for new vehicles or 41% for used vehicles in January) or a new home.

Kleinhenz’ noted that consumer worries about rising prices could become self-fulfilling if workers demand higher wages to compensate and will play a role in the Federal Reserve’s efforts to bring inflation under control.
“After decades of relatively low levels, inflation is on everyone’s mind and has been making consumers and businesses miserable as prices have picked up dramatically over the past year,” he said. “However you measure it, inflation has become a powerful force and plays a key role in the nation’s economic outlook.”

Actual price gains are expected to slow down in the coming months as they lap relatively high readings from the year before, but the Fed is concerned about the risk of an unwanted jump in inflation expectations, according to Kleinhenz.

“If consumers expect rampant inflation to continue, the possibility of a wage-price spiral could be unleashed as they demand to be paid more,” he explained. “In that scenario, the Fed would need to be even more aggressive with its rate hikes – a move that might stop inflation but at the risk of slowing the economy to the point of causing a recession.”

Kleinhenz’s remarks came in the March issue of NRF’s Monthly Economic Review, which cited the 7.5% year-over-year increase in inflation as measured by the Consumer Price Index in January along with the core Personal Consumption Expenditures Price Index, which is the Fed’s preferred measure of inflation, rising 5.2%.

Consumers expect inflation to grow 5.8% during the next year – less than in 2021 but still well above pre-pandemic levels – according to the latest Survey of Consumer Expectations from the Federal Reserve Bank of New York. But high rates are not expected to be long-term, with the survey showing consumers expect a relatively normal 3.5% during the next three years.