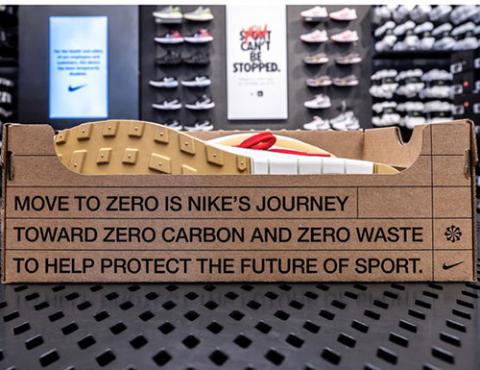 Nike is giving its merchandise a second chance.

The athletic footwear and apparel giant is introducing a new program, Nike Refurbished, which resells returned shoes at discount prices. After a shopper returns a pair of shoes to a participating Nike store within a 60-day return window, eligible footwear is added to the Nike Refurbished lineup.

Each pair is inspected and refurbished by hand, and then given a condition grade. The program uses a number of different products and tools to return shoes to as close to new condition as possible. Once the shoes land back in a Nike store, the price is based on footwear type and condition grade.

Messaging on the boxes provides information such as what kind of shoes are inside and the condition grade. Customers can also scan the box’s QR code to obtain more information about the Nike Move to Zero climate initiative.

“Up to fifteen U.S.-based stores will carry Nike Refurbished footwear by the end of April 2021, with plans to integrate more of this product at additional U.S.-based stores in the coming year,” Nike said in a statement.

Apparel resale is a growing market. Nordstrom piloted See You Tomorrow, an online and in-store resale shop, as well as a customer intake program in its New York flagship that allowed customers to bring in their “gently-used” used items in exchange for Nordstrom gift cards. And retailers including Macy’s and J.C. Penney have partnered with ThredUp to sell secondhand women’s apparel from the company in their stores

Nike Refurbished extends the lifespan for three types of footwear: like new (maybe worn for a day or two before being returned), gently worn (a little longer), and cosmetically flawed (something like a small snag that happened in manufacturing).

Nike Refurbished is also covered by Nike’s 60-day wear test. If it’s not what a shopper needs, they can return it.

Returned product that doesn’t make it to Nike Refurbished will be donated via community partners or recycled in the proprietary Nike Grind program, which recycles footwear products into materials such as artificial turf and athletic court surfacing.