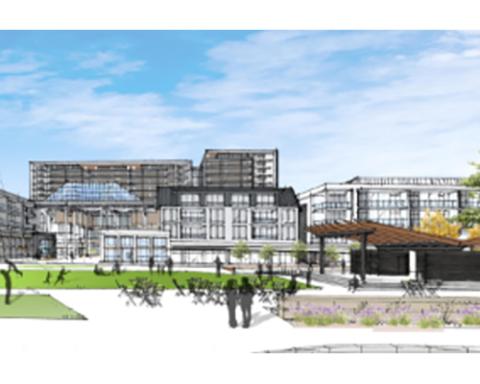 The Tri-County Mall property in Springdale will be transformed into a mixed-use community that will include a high school over the next 10 years.

When it opened in 1960, Tri-County Shopping Center was the biggest mall built by Baltimore-based developer Joseph Meyerhoff and the Cincinnati metro’s first enclosed shopping space. Now, like many pioneer malls, it will be transformed into a mixed-use development.

The mall will be razed and the site will be filled with 20 residential buildings containing 2,600 units plus another 39 buildings for retail, offices, bars, restaurants, greenspaces, hotels, and fitness centers. The project will come together in five phases that will come into place over the next 10 years.

A centerpiece of the project will be a 120,000-sq.-ft. STEAM institute to be run by Princeton City Schools that focuses on science, technology, engineering, arts, and mathematics education.

“It’s the biggest project in the history of our city and one of the most ambitious undertakings our entire region has ever seen,” Springdale Mayor Doyle Webster told Channel 19 news in Cincinnati. “It will bring jobs, inspire community, cultivate learning and ignite growth. I could not be more excited that we are now officially on our way.”

Tri-County Mall was originally an open-air shopping center featuring Pogue’s and Shillito as its anchor stores—the Pogue’s later being converted to a J.C. Penney’s. In 1969 Sears opened in a new enclosed wing, leading the entire center to become a mall in following years. By the early part of this century, Tri-County lost its J.C. Penney anchor and faced stiff competition from the nearby Cincinnati Mills center. Sears left in 2018, and when Macy’s announced it would close in early 2021, the mall closed later in the year.