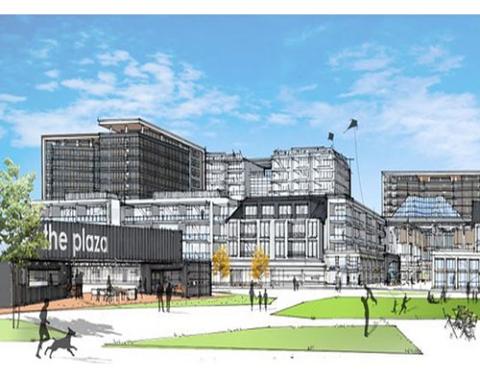 This proposed mixed-use project could replace Tri-County Mall in Springdale, Ohio, which opened in 1960.

Two Texas-based firms aim to turn Tri-County Mall in the Cincinnati Metro into a mixed-use neighborhood.

Marketspace Capital and Pearl Harbor Capital have put forth a plan to raze the structure that was anchored by the Pogue’s and Shillito’s department stores when it opened in 1960 and fill the 76-acre site with up to 20 residential buildings, five office buildings, and as many as 30 stores, restaurants, and entertainment providers, according to a report in the Cincinnati Post.

Citing “uncertainties and economic forces adversely affecting traditional retail,” the companies’ plan advises that more entertainment tenants than traditional retail tenants be courted for the project. Also envisioned are a hotel, a recreation center, and parks.  The only structures to be left standing will be garages containing more than 3,000 parking spaces.

The redevelopment received approval from the local Springdale Planning Commission, which has referred the project to the Springdale City Council.