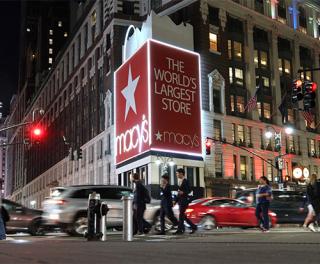 Macy’s second-quarter sales inched down to $5.6 billion from $5.647 billion a year ago.

On the company's earnings call, Macy's said its new digital  marketplace will launch in the coming weeks.  The marketplace will allow  third-party merchants and brands sell their products on macys.com and bloomingdales.com across a wide range of categories, including pants, home, kids, baby and maternity, beauty and health, and toys and electronics.

"We have a great, dedicated team in place to build out our marketplace to include hundreds of new brands over the next few months," Jeff Gennette, chairman and CEO, Macy’s, told analysts on the call.

Digital sales decreased 5% year-over-year, while increasing 37% versus the second quarter of 2019.  Digital revenue generated 30% of net sales, down 2% from a year ago.

By brand, Macy’s comparable sales were down 2.9% on an owned basis and down 2.8%, on an owned-plus-licensed basis.The company said it continued to see strength in occasion-based categories, including career and tailored sportswear, fragrances, shoes, dresses and luggage.

Bluemercury comparable sales were up 7.6% on an owned and owned-plus-licensed basis.

“During the second quarter, we delivered solid results, despite the challenging environment,” Gennette stated.  “We believe that we are well positioned to respond to changing consumer behaviors.”

Gennette added that, during the past two years, the company’s  “Polaris”  strategy has made it faster and more agile, allowing  it to navigate rapidly changing consumer trends and macro conditions.  In June, Macy’s said it was speeding up its plans to open smaller-sized stores that are not located in traditional enclosed malls.  It also is continuing to expand its Macy’s Backstage off-price concept.

“We expect to come out of this uncertain period in a strong position with a healthy balance sheet, new capabilities and a talented team ready to capture renewed demand,” he continued.

Macy’s reported that its inventory was up 7% year-over-year as inventory levels in certain categories remain elevated due to reduced year-over-year sell-throughs since Father's Day “driven by the industry-wide levels of excess inventory and a slowdown in consumer discretionary spend.”

The retailer is targeting “appropriate” inventory levels by the end of the year. It is implementing markdowns to clear aged inventory in seasonal goods, private brand merchandise and pandemic-related categories, such as active, casual sportswear, sleepwear  and soft home.

The company said its lowered outlook for the remainder of the year incorporates the risk it sees in the continued deterioration of consumer discretionary spending in some of its categories and the level of inventory within the industry, as well as risks associated with a more pronounced macro downturn.

“This outlook reflects a careful view of the impacts of the pressures faced by the consumer and those placed on the business given the weakening macroenvironment,” Macy’s stated. “Additionally, the company's outlook incorporates the markdowns and promotions it anticipates needing to liquidate aged inventory and further reduce the merchandise category stock to sales imbalances by the end of the year.”