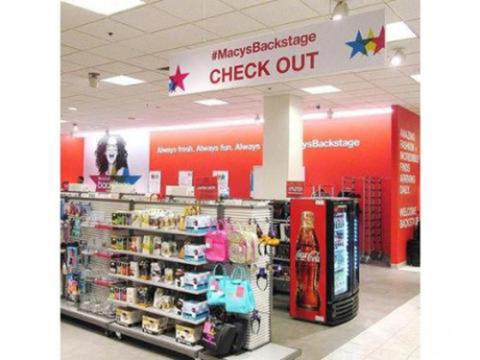 The assortment includes apparel for women, men, and children; as well as toys, housewares, beauty products, designer handbags, activewear, and pet items. To support the growth of Macy’s Backstage, a Backstage distribution center in Columbus, Ohio, is dedicated to expediting merchandise to Backstage locations nationwide. Macy’s launched the off-price banner in fall 2015.

Following the growth of Macy’s Backstage in nearly 300 stores nationwide, including 45 new in-store locations opened during 2021, Macy’s will open a Backstage inside the Macy’s State Street flagship store in Chicago on April 9. The retailer will also expand the concept to its New York City flagship store in Herald Square, with over 15,000 square feet of dedicated space in May.

Macy’s accelerated its off-mall, small format expansion in 2021 with two new free-standing Backstage locations in Dallas, as well as three Market by Macy’s locations in Dallas and Atlanta Macy’s continues to shift its store fleet to meet changing consumer behaviors and plans to open additional off-mall locations throughout 2022.

At Macy’s Backstage, shoppers can earn and redeem Macy’s Star Rewards loyalty points and use their Macy’s credit card. In preparation for this year’s expansion, Macy’s Backstage will hire a range of positions.

The first set of store openings in April includes:

“Macy’s Backstage inspires customers to express their personal style through its offerings of quality merchandise and brands at great prices, which is why we look forward to bringing Macy’s Backstage into more of our local communities,” said Michael Hersh, Macy’s VP of off-price. “We are especially excited to bring Backstage to our downtown stores in Chicago and New York City as the brand expands nationwide.”