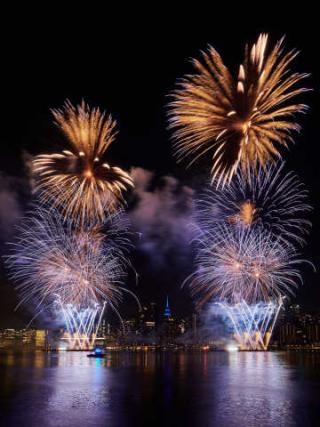 One of summer’s most iconic events is returning after being hijacked last year by the pandemic.

The 45th edition of Macy’s annual July 4 fireworks spectacular will return live to New York City next month. The fireworks are set to light up the sky starting at about 9:25 p.m on July 4. The 25-minute display will feature more than 65,000 firework shells and effects, which will be launched from five barges positioned on the East River. It will be part of a two-hour special on NBC that will begin at 8 p.m.

“They are bringing the full-scale fireworks show as we have loved it for decades and decades for all of to enjoy,back to New York City for all of us to enjoy,”  Mayor Bill DiBlasio said at a news conference, adding that Macy’s is "putting together the biggest fireworks display they ever have."

Macy’s changed the event  last summer to discourage spectators from gathering in large groups amid the pandemic.  Instead of  one big display, the company put on seven smaller, unannounced displays over several days that were launched from different parts of the city. The displays were taped and shown on the July 4th television special.

“As America commemorates Independence Day, we are thrilled to join the celebration with a spectacular Macy’s 4th of July Fireworks display honoring the heroic spirit of our nation,” said Will Coss, executive producer of Macy’s 4th of July Fireworks. “Live from New York City, five barges positioned on the East River will launch an epic celebration that will inspire a renewed sense of hope and optimism among our fellow New Yorkers and viewers nationwide.”

Public viewing locations will be set up and managed by the NYPD, with separate locations for verified fully vaccinated spectators and non-vaccinated ones.