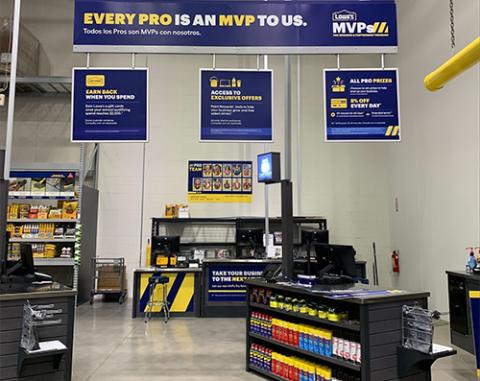 Lowe’s Cos. posted a strong fourth quarter that topped analysts’ estimates amid the ongoing real estate boom that continues to fuel demand for home renovation and upgrading projects.

Lowe’s has been working to attract professional customers, launching a new loyalty program and offering an enhanced store experience. Its efforts paid off in the fourth quarter as pro sales increased 23%.

"We delivered another year of outstanding performance in 2021, as we gained market share across DIY and Pro through our Total Home strategy,” stated Marvin R. Ellison, Lowe's chairman, president and CEO. “In 2021, we increased comparable sales by 6.9% while generating over 170 basis points of operating margin improvement, with our relentless focus on productivity and enhanced pricing strategies.  We remain confident in the long-term strength of the home improvement market, and our ability to expand operating margin."

In a new initiative, Lowe's announced it is partnering with Instacart to test same-day delivery in as fast as one hour. The service is initially available in Boston and Charlotte, N.C., with plans to expand in the coming months.

In the fourth quarter, Lowe’s awarded a discretionary year-end bonus of $265 million to front-line associates in recognition of their hard work during the pandemic in 2021. Also, for the eighth consecutive quarter, 100% of Lowe's stores earned a Winning Together quarterly profit-sharing bonus, resulting in an expected total payout of $94 million to front-line hourly associates. The payment is $24 million above the target level.

It said same-store sales will range from a decline of 1% to an increase of 1% for the full year.