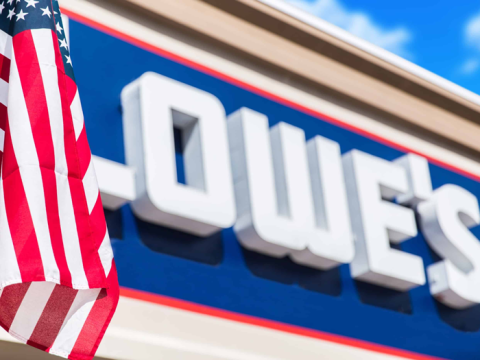 Lowe’s net earnings climbed 68.7% to $2.82 billion, with adjusted earnings per share of $3.75, for the quarter ended July 31, up from $1.7 billion, with adjusted earnings of $2.15, in the year-ago period in the prior year quarter. Lowe’s strong earnings performance came as it invested $460 million during the quarter in support of frontline hourly associates, communities and store safety. Additionally, the second quarter performance resulted in a record quarterly "Winning Together" profit-sharing bonus for its hourly associates at 100% of its stores, which totaled $107 million.

Revenue rose 30% to $27.3 billion, up from $21.0 billion last year and easily topping Street estimates for $24.27 billion.Online sales soared 135%.  Sales were driven by a consumer focus on the home, core repair and maintenance activities, and wallet share shift away from other discretionary spending, Lowe’s said.

“We delivered very strong second-quarter results, with all merchandising divisions posting comparable sales growth exceeding 20% and all U.S. geographic regions delivering comparable sales growth of at least 30%,” stated CEO Marvin Ellison. “Through our retail fundamentals strategy, we have dramatically improved our technology and operational platforms, which enabled us to meet customer demand and grow our business.”

Looking ahead, Lowe’s sales momentum has continued into August, Ellison said, “and we are investing in the business to further our omnichannel capabilities.”

Last week, Lowe’s announced the launch of a major construction program to support the need for fast fulfillment across channels. During the next 18 months, the company plans to open 50 cross-dock delivery terminals, seven bulk distribution centers, and four e-commerce fulfillment centers