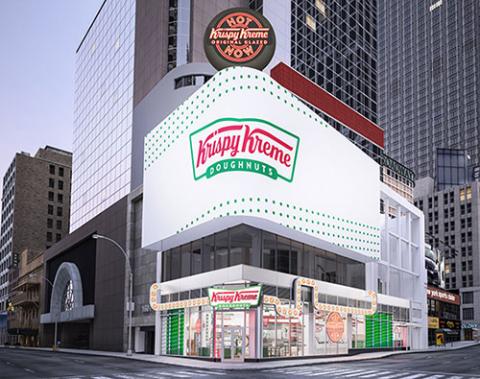 The Big Apple is about to get sweeter.

Krispy Kreme on Wednesday announced it will open six locations in New York City this year, including its previously announced Times Square flagship. Currently, the company has one city location (in Penn Station), which is set to reopen on Jan. 30 after being remodeled as part of the expansion.

Krispy Kreme’s 4,500-sq.-ft. flagship at Broadway and 48th Street in Times Square will open in May. The store, which is expected to serve more customers annually than any other Krispy Kreme location in the world, will showcase the doughnut-making process from start to finish, from the mixing of raw ingredients to the brand’s iconic glaze “waterfall.” It will include a stadium-style seating area designed as the world’s largest Krispy Kreme doughnut box.

“New Yorkers expect the best, including the best doughnuts,” said Andrew Skehan, Krispy Kreme’s President of North America. “Their reaction to our Times Square flagship announcement last year was tremendous. It fueled our excitement to expand in the Big Apple in an even bigger way,”