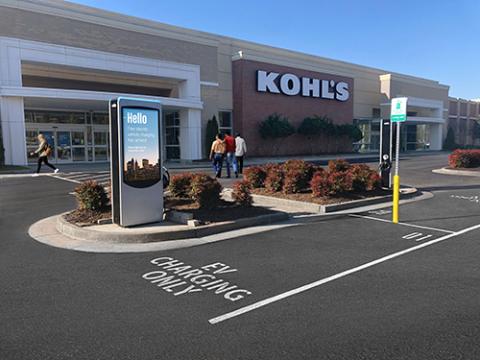 Kohl’s has reached a key sustainability milestone much earlier than it expected.

The department store retailer said it achieved a total of 50% reduction in its scope 1 and 2 emissions in 2021 based on a 2014 baseline, achieving its climate reduction goal four years ahead of schedule.

In other accomplishments, Kohl’s said it has:

2022 initiatives
Kohl’s noted that while significant progress has been made in its environmental sustainability goals, more work is underway to continue to track towards – and surpass – these milestones. This includes the addition of 200 new electric vehicle charging stations this year, along with 400 in 2023, to total more than 1,000 electrical vehicle charging stations around the country.

“By supporting electrical vehicle owners, the charging Kohl's provides more than 800,000 miles of driving and saves more than 36,000 gallons of gasoline annually,” the company stated.

Solar
Additionally, Kohl’s is expanding its solar program, beginning construction on 15 new solar locations this year. Currently, more than 6% of the electricity Kohl’s uses to power its business comes from renewable sources.

Many Kohl’s locations get up to 50% of their energy from solar. The additional of 15 projects will increase Kohl’s installed solar capacity by 10.4%, to a total of 56.97 megawatts.

LEDs
Kohl’s is also continuing to update stores with energy-saving LED lighting and has committed to updating all stores with LED lighting by 2025. The initiative will deliver at least a 20% reduction in scope 2 emissions.

In November 2021, Kohl’s was also one of the first companies to join the U.S. Department of Energy’s Better Climate Challenge, strengthening Kohl’s commitment to reducing greenhouse gas emissions. As a partner in the challenge, the company said it plans to share its carbon reduction progress and strategies to help other organizations build on its success while also establishing a goal of reaching net zero by at least 2050.