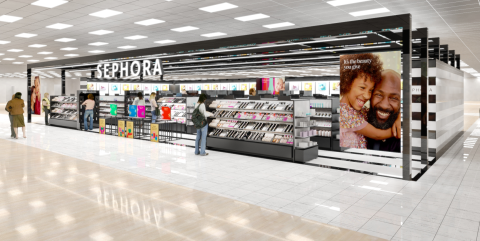 Kohl’s Corp. is expanding its partnership with beauty giant Sephora.

The department store retailer said it plans to expand its Sephora store-within-a-store concept to all its 1,100-plus stores nationwide.  (Approximately 600 Sephora shops are now up and running at Kohl's.)  In 2023, the concept will be expanded to 250 more location, for a total of 850 full sized, 2,500-sq.-ft.  Sephora at Kohl’s locations. Kohl’s projects that the initiative will grow to achieve $2 billion in annual sales by 2025.

The expansion comes one year after the first round of Sephora shops at Kohl's opened. The shops, which have been at the center of Kohl's store remodels, offer an experience designed to mimic the look and feel of a freestanding Sephora.

The news about the expansion came the same day that Kohl’s reported earnings that included an 8.5% drop in sales.

According to Kohl’s, the 200 stores with Sephora that opened in 2021 have maintained a high-single-digit percent sales lift, relative to the balance of the chain. And in the nearly 400 stores opened so far in 2022, the retailer said it is seeing a mid-single digit percent sales lift,  consistent with the initial performance in the first 200 stores.

Roughly half of all customers buying Sephora are attaching at least one other category in their purchase, the company said.

In addition, the partnership is attracting new, younger and more diverse customers, according to Kohl's. Customers who shop Sephora at Kohl's visit more frequently than the retailer’s average customer, and Kohl’s has acquired more than 1 million new customers since launching the partnership in August 2021.

Kohl's has made major investments in its partnership with Sephora. More than half of Kohl’s capital spending this year is being directed toward building the Sephora locations and remodeling the stores that contain them, reported The New York Times.

“Sephora at Kohl's provides our customers with easier access to prestige beauty, and the partnership has brought in new, younger and more diverse customers to Kohl's," said Michelle Gass, Kohl’s CEO. "We are incredibly proud of how our companies have come together so seamlessly to create a truly unprecedented and unique in-store experience. Our success to date proves that this partnership is working, and this expansion is the next, exciting chapter in our history together.”

Kohl’s also highlighted a few new joint Kohl’s-Sephora offerings recently launched or on the horizon, including:

“For such a big endeavor, our partnership with Kohl’s has been executed extremely well and has delivered incredible results thus far, and there is so much potential to this partnership with the addition of 400 stores that have opened this summer,” said Jean-André Rougeot, president and CEO, Sephora Americas. “At Sephora, our mission continues to be welcoming more people into the prestige beauty community, and we are achieving exactly that.”

View a map of where Sephora at Kohl’s is currently located here.

Headquartered in Menomonee Falls, Wis., Kohl’s operates more than 1,100 stores in 49 states, as well as the Kohls.com e-commerce site and the Kohl's app.